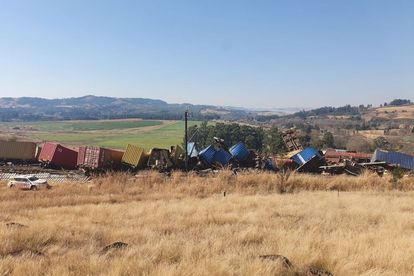 A goods train in KwaZulu-Natal derailed on the morning of Sunday, 10 July. Photo: Netcare 911 / Facebook

A goods train in KwaZulu-Natal derailed on the morning of Sunday, 10 July. Photo: Netcare 911 / Facebook

A goods train derailed in KwaZulu-Natal on the morning of Sunday, 10 July, leaving two injured.

Spokesperson for Netcare 911 Shawn Herbst said they responded to a rail incident at 11:56 next to the R103 near Nottingham Road. According to the reports they received, Herbst stated that a goods train had derailed.

Carts were on the embankment and two individuals were injured

Herbst stated that upon arrival they found that majority of the carts were on the embankment. They assessed two adult males who face injuries.

“Two adult male occupants of the train were assessed and found to have sustained moderate injuries. Once treated, both patients were transported by private ambulance to hospital,”

The exact cause of the derailment is unknown at this stage

Spokesperson for Midlands EMS Roland Roberston stated that upon their arrival they found that two patients had jumped out further up from the accident site. Ambulances were dispatched to assist the injured individuals.

The exact cause of the train’s derailment is currently unknown and investigations into the matter are ongoing.

Luxurious Blue Train derails, no passengers on board

Similarly, last year the famous luxurious Blue Train derailed at the Union Station Loop in Germiston. According to Transnet Freight Rail’s (TFR) spokesperson Sibu Majozi, the accident happened at 00:35 when 19 empty coaches of one of the Blue Trains derailed.

“This was a staged (unmanned) train with no passengers on board. No injuries were reported on site. “TFR will investigate the cause of the derailment and apply remedial action where necessary,” said Majozi.

South Africans were not happy about the news of the derailment. Some were saying the derailment was due to incompetence, mismanagement, and lack of sufficient maintenance. The Blue Train combines the luxury of the world’s leading hotels with the charm of train travel, and this makes for an unrivaled experience. Read the full story here.