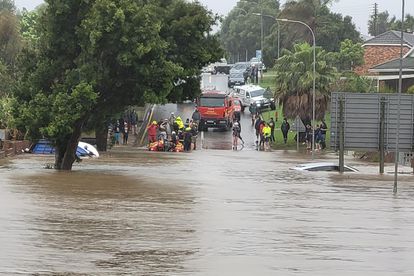 A troop of soldiers gaining efforts to help restore the facilities in South Africa. Photo: Supplied

A troop of soldiers gaining efforts to help restore the facilities in South Africa. Photo: Supplied

Initially, there was a yellow level 4 rain warning which was also increased to an orange level 5. Switching from a yellow to an orange warning means that more damage to infrastructure is expected, and the potential for fatalities is rising but red is more dangerous.

The weather service said widespread showers and thundershowers are expected across KZN as a result of a cut-off low associated with a surface high.

“Some stations have recorded significant rainfall amounts and models indicate accumulations of more than 20mm in some places along the KZN coast.

“Considering the vulnerability of some of these areas after recent events, severe impacts can be expected over areas and north-eastern parts of KZN on Saturday and Sunday.”

KZN MEC for Cooperative Governance and Traditional Affairs, Sipho Hlomuka, has urged residents to be at the very top of their collective guard over the weekend, fearing the worst from the latest forecast: