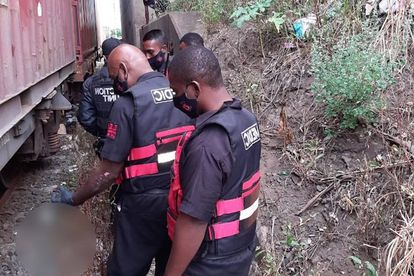 A local crime prevention group got the shock of a lifetime on Tuesday, after they recovered the headless bodies of two men in Tongaat, KZN. The pair were decapitated by a passing goods train at around 6:20 this morning.

The situation is just as bizarre as it is tragic. Little is known about how these gruesome deaths happened, and one unfortunate passerby became the first person to discover the severed heads. Reaction Unit SA (RUSA) were the emergency responders at the scene, and they confirmed that the incident took place just behind Plane Street:

“Two men were decapitated by a goods train behind Plane Street in Tongaat. A passerby contacted Reaction Unit South Africa (RUSA) and reported the incident. Reaction Officers and RUSA Medics were dispatched to the scene and on arrival found railway authorities in attendance.”

Those in charge of the operational side of things will now determine what exactly went off here. No foul play has been suggested so far, and investigators continue to patrol the ghastly scene on Tuesday.

One thing that has been established so far is the status of the men who tragically lost their lives. Both were understood to be ‘vagrants’, and they were living under a bridge that’s near to the tracks. The pair had been based here ‘for a considerable amount of time’, before meeting their grisly end. RUSA clarified this in a recently published statement:

“It is alleged that the two men were vagrants who slept under a bridge next to the railway line. Circumstances leading up to the incident have not been established at this stage.”