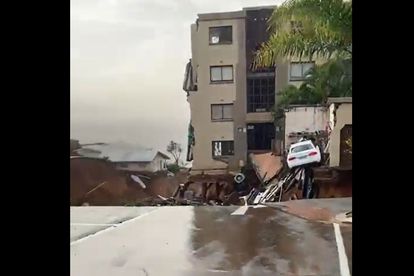 After less than a month to even start to recover from last month’s brutal KZN floods, it is happening again. After a weekend of downpours and storms, video footage has emerged showing a building in Umdloti being washed away as a result of the weather. With a Level 10 weather warning out for KwaZulu-Natal, the province is once again in all kinds of trouble.

Several residents in Umdloti north of Durban have been left homeless. Part of a block of flats in a complex in the area washed away. Heavy rainfall and mudslides led to the ground collapsing around and under the buildings.

ALSO READ – Johannesburg potholes: Over 100 000 fixed but what happens now?

Emergency Search and Rescue officials are carrying out operations in the area. It is not yet clear how many people have been injured or killed.

Video of the scene shows several huge craters where the ground has completely collapsed.

Cooperative Governance Minister Nkosazana Dlamini-Zuma and her Intergovernmental Committee on Disaster Management, have met to discuss the ongoing storm and KZN floods.

With the rains only expected to dissipate on Monday, the committee says an already dire situation is only being made worse. The ground in many areas is still saturated, and can easily be flooded as a result.

“Government through the departments such as Social Development, Defence Force, South African Police Service, and other social partners are working with disaster management teams across the province to monitor the high risk areas, determine the extent and level of risk, evaluate damages where they exist and provide immediate relief to needy communities.”

The committee says it will continue to work to identify those at risk, so they can be evacuated to safety.