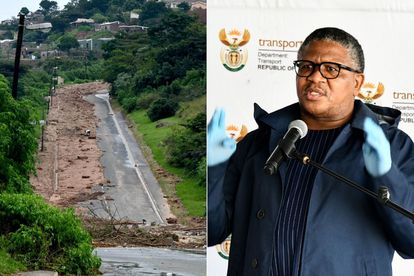 Minister of Transport Fikile Mbalula says the estimated damage to provincial and municipal roads in KZN amounts to R5.6 billion. The minister shared that it would cost billions to fix roads in the province following the devastating floods.

The costs and extent have yet to be confirmed

Nearly 450 people have been confirmed to have lost their lives as a result of the torrential rains and floods. Infrastructure damage has been widespread and the extent and cost have yet to be confirmed.

Minister Mbalula said that the department gave the National Roads Agency the mandate to be the implementation agency. He explained that some municipalities had done work of their own, he made specific note of the eThekiwni Municipality.

“The province has committed resources, some municipalities have already done work, particularly eThekwini, but I know it’s not sufficient. We are going to improvise in terms of capital-intensive support,”

Mbalula says R700 million can be spent on National roads

Mbalula shared that Government will be verifying the true cost of the damage before implementation. He added that they would be clamping down in situations where inflationary prices are brought up in terms of building roads.

“We will verify that before implementation and where there is inflatory prices in building roads, we will clamp down,” said the minister.

Mbalula added that Government will be able to spend R700 million to repair national roads. The focus will be on the N2 and N3.

eThekwini Mayor Mxolisi Kaunda provided an update on the estimated cost of damage. According to Kaunda, the recent torrential rains and flooding caused damages of around R757 million.