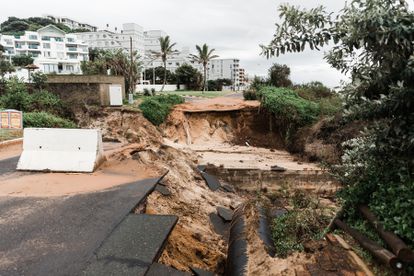 A general view of a severely damaged home and of the road infrastructure following heavy rains and winds in Umdloti north of Durban, on 22 May, 2022. – Floods, mudslides and rainstorms struck the South African port city of Durban and surrounding KwaZulu-Natal province. Photo: RAJESH JANTILAL / AFP

A general view of a severely damaged home and of the road infrastructure following heavy rains and winds in Umdloti north of Durban, on 22 May, 2022. – Floods, mudslides and rainstorms struck the South African port city of Durban and surrounding KwaZulu-Natal province. Photo: RAJESH JANTILAL / AFP

Following heavy rainfall and floods in the past weekend, the KwaZulu-Natal (KZN) Education Department has urged parents to use their discretion on whether or not to send children to school.

A number of roads and bridges washed away or collapsed. Other infrastructure was also damaged by the floods and over 200 people had to be evacuated from their homes.

KZN PARENTS TO USE OWN DISCRETION ON SENDING KIDS TO SCHOOL

In an interview with Newzroom Afrika, KZN Education Head of Department, Nkosinathi Ngcobo said parents need to exercise caution and that they are aware that there are certain schools that learners may not be able to reach.

“Although the rain has stopped in parts of KZN, we anticipate that the water levels on top of some bridges is still high and it will be a challenge for people to pass.

“This time around it is not as bad as it was in April. We haven’t received any reports that schools have been damaged, but, of course, these reports will be sent today (Monday) to get a clear picture. The only report we have so far is that of roads that collapsed around schools. Majority of our schools will be functional, only those few schools where roads collapsed again and learners may not be able to reach it.”

UMDLOTI BEACHFRONT LEFT IN A STATE AFTER LATEST STORM

Several residents in Umdloti north of Durban have been left homeless. Part of a block of flats in a complex in the area washed away. Heavy rainfall and mudslides led to the ground collapsing around and under the buildings.

After first getting video of the complex, the video from the front of the beach showing the missing piece of earth, is simply frightening.

KZN Premier, Sihle Zikalala together with members of the Executive Council, eThekwini Municipality leadership and councillors will visit areas including the Bluff, uMdloti and Westbrook where residents had to be evacuated after heavy rains caused damage to homes and infrastructure.