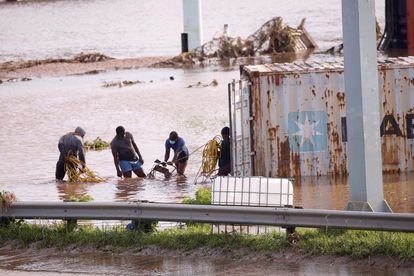 The number of people who have been confirmed dead following the devastating downpours in KwaZulu-Natal (KZN) has risen to 341. Image: Twitter/KZNfloods

The number of people who have been confirmed dead following the devastating downpours in KwaZulu-Natal (KZN) has risen to 341. Image: Twitter/KZNfloods

The Department of Cooperative Governance and Traditional Affairs (COGTA) has declared a state of disaster in KwaZulu-Natal (KZN) in the wake of devastating floods which have wreaked havoc in several parts of the province.

Days of heavy downpours have left behind a trail of destruction, killing hundreds of people while others remain unaccounted for. In addition, residents have been left destitute as their homes were washed away. Government has since moved to provide aid to victims, including food and shelter.

President Cyril Ramaphosa also visited the province to assess the damage, promising more assistance and also providing words of comfort to grief stricken families. Government will also be paying for the funeral costs for the loved ones.

YOU CAN ALSO READ: KZN weather watch: More ‘heavy rainfall’ to hit the province over Easter

STATE OF DISASTER IN KZN GAZETTED

The state of disaster in KZN was gazetted by the head of the national disaster management centre, Dr Mmaphaka Tau on Wednesday, 13 April 2022. A state of disaster will enable government to allocate the resources and funds necessary to deal with the impact of the floods.

Tau has urged organs of state to further strengthen support to existing structures to implement contingency arrangements and ensure that measures are put in place to enable the KZN province to effectively deal with the effects of the disaster.