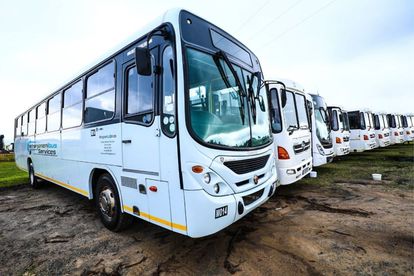 The KZN government are forging ahead with their goal of have at least 70% of the bus industry in the hands of the previously disadvantaged. Photo: KZN Government

The KZN government are forging ahead with their goal of have at least 70% of the bus industry in the hands of the previously disadvantaged. Photo: KZN Government

The KwaZulu-Natal government invested R71 million on Thursday to make the road smoother for taxi drivers to join the bus industry. KZN Premier Sihle Zikalala has described the deals as a tangible demonstration of economic transformation.

Zikalala celebrated with the Mthonjaneni Taxi Association as it diversified its business operations by entering the bus transport sector. The event took place at the Mthonjaneni Bus Depot, in northern KZN.

Thursday was the official signing of the Memorandum of Understanding (MOU) between the KZN Department of Transport, IDFC which is under the Department of Economic Development, Tourism and Environmental Affairs.

Lennox Mabaso, spokesperson for KZN provincial government, says the move is in line with their economic transformation goal to have at least 70% of the subsidised bus transport industry being in the hands of the previously disadvantaged individuals or groups.

“The KZN economic empowerment goal to have at least 70% of the subsidised bus transport industry in the hands of previously disadvantaged individuals or groups is no secret. This must be seen as part of Operation Vula Umnotho. It is part of our overarching strategy of Radical Socio-Economic Transformation (RET) which seeks to fundamentally change the patterns of ownership and management of the economy in favour of blacks in general and Africans in particular,” said KZN Premier Sihle Zikalala.

Zikalala says they take immense pride in seeing men and women in the taxi industry and other black South Africans participating in the bus transport industry.

NEW CONTRACTS WORTH OVER R285 MILLION OVER SEVEN YEARS

Zikalala says it is government’s responsibility to support the previously disadvantaged in KZN.

“As part of this strategic collaboration, the IDFC has been able to provide financial support to the value of R71,5 million, which consisted of purchasing 32 buses, 4 quantum mini-buses, 9 ticket machines, land and building for the construction of a depot for Mthonjaneni Bus Services,”

He added that at least 72 permanent jobs were created and in total newly negotiated empowerment contracts for 11 companies for a period of seven years amount to more than R 285-million.

Representatives of the KZN South African National Taxi Council as well as the Mthonjaneni Transport Services, said commended the move by the provincial government adding that the MOU signing is an important instrument for deracialising the bus transport industry and ensuring that it reflects the demographics of the people of KwaZulu-Natal, the majority of whom are Africans.