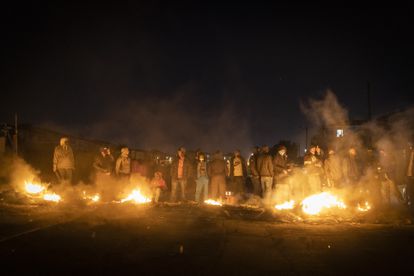 Community members from Phoenix township, North of Durban gather by a roadblock set to prevent looters to operate in Phoenix Township, North Durban, on July 15, 2021.

Community members from Phoenix township, North of Durban gather by a roadblock set to prevent looters to operate in Phoenix Township, North Durban, on July 15, 2021.

The Directorate for Priority Crime Investigation (Hawks) reportedly arrested several suspects for their alleged involvement in stoking the flames that led to the devastating July unrest in KwaZulu-Natal (KZN) and Gauteng last year, on Thursday, 11 August.

According to a TimesLive report, at least six suspects were arrested by the Hawks in a secret operation in Kwazulu-Natal on Thursday.

As previously reported, the Justice, Crime Prevention and Security (JCPS) cluster provided an update on the progress made with regard to the deadly unrest that left 354 people dead in July 2021.

On 8 July 2022, Minister of Police, Bheki Cele said 86 people were being monitored by the State for allegedly inciting public violence during the July unrest.

THREE THINGS WE KNOW ABOUT THE SUSPECTS

In a related incident, two men were sentenced to five years imprisonment each by the Durban Regional Court on Thursday for public violence committed during last year’s unrest in KZN.

“The men were sentenced in terms of Section 276 (i) of the Criminal Procedure Act, which means that they may be placed under correctional supervision, at the discretion of the Correctional Commissioner after having served a portion of their sentence,” said Kara.