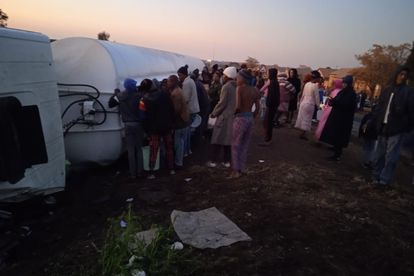 A fuel tanker carrying diesel was allegedly looted after crashing along the R76 Road in Kroonstad, Free State on Tuesday morning, 5 July.

The driver of the tanker, a 28-year-old man, was reportedly travelling from Durban to the North West. As he passed through Kroonstad he allegedly lost control of the vehicle and it overturned.

He was taken to a hospital for treatment for minor injuries.

Sergeant Rani said police members headed to the hazardous scene immediately and tried to disperse the crowd, however, they responded by pelting the officers with stones.

The Welkom Public Order Policing unit was called in to bring the scene under control.

“It is so heartbreaking to see how our community members are at ease with putting their lives in danger more especially seeing that kids are also involved. We cannot be so ill-disciplined especially on such,” said Fezile Dabi District Acting Commissioner, Brigadier Mapulane Mbeloane, according to Kasi Voice News.

In 2021, At least 99 people were killed Freetown, Sierra Leone, on 6 November when a fuel tanker exploded after a collision. Among the victims, were people who flocked to the tanker to siphon fuel from the leaking vehicle, according to Reuters.

The South African reached out to the Free State SAPS for comment on the incident. It was not received at the time of publication.