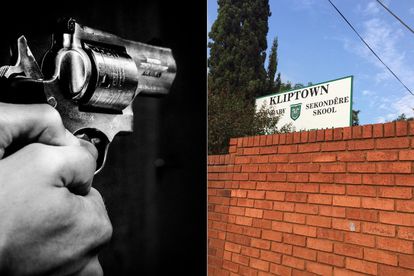 A shooting outside Kliptown Secondary School in Eldorado Park is being investigated. Photo: Stock Image / Pixabay and @Phumla_Mthala / Twitter

A shooting outside Kliptown Secondary School in Eldorado Park is being investigated. Photo: Stock Image / Pixabay and @Phumla_Mthala / Twitter

Teachers and students were left fearful after a number of gunshots were fired outside Kliptown Secondary School, Eldorado Park.

The shooting happened at midday on 23 August

The incident took place around midday on Tuesday, 23 August and SAPS revealed that no injuries have been reported. The motive behind the shooting is currently being investigated by authorities.

Sergeant Roxanne Gibb, the spokesperson for the Eldorado Park Police Station, said authorities were called to the scene shortly after the gunshots were fired outside the school Pupils were standing outside the school at the time, reports IOL.

The suspects fled by the time police arrived

“The principal called the police and when they arrived, the armed suspects had fled. Fortunately, no one sustained injuries. We will continue to keep a close eye on the matter,” said Gibb.

The national South African Police Service was sent a police report about the matter following the incident.

Previously, it was reported that the police in Gauteng is on the hunt for three suspects who allegedly opened fire on a group of people in Eldorado Park, Johannesburg on Wednesday, 8 June.

South African Police Service (SAPS) spokesperson Lieutenant-Colonel Mavela Masondo said the shooting took place at approximately 12:00. Masondo said the preliminary investigation suggests that the three suspects pulled up next to one of the flats in Eldorado Park and randomly opened fire.

The hospitalised victims are considered to be in serious but stable condition. The fourth victim sustained minor injuries. The motive for the shooting is yet to be established. Members of the public with information pertaining to the matter are encouraged to contact their nearest police station or Crime Stop at 08600-10111. Read the full story here.