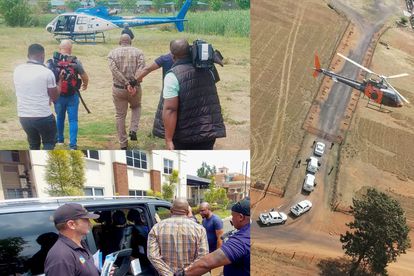 The 35-year-old so-called kingpin behind a fuel theft syndicate was arrested in Pretoria. Images: Supplied.

The 35-year-old so-called kingpin behind a fuel theft syndicate was arrested in Pretoria. Images: Supplied.

Nearly eight-and-a-half million litres of fuel – valued at R102 million – has been stolen from Transnet’s national pipelines over the past year. The Directorate for Priority Crime Investigation (Hawks) arrested a so-called kingpin connected to the syndicate on Wednesday, 19 October.

The 35-year-old alleged kingpin was arrested in a massive multidisciplinary operation in Pretoria for theft of fuel and damage to essential infrastructure.

The kingpin’s arrest comes after two suspects – aged 35 and 41 – were nabbed on Saturday for theft of fuel and tampering with Transnet’s national pipeline in Vrede, Free State.

Mauro Aurelia Langa, 41, and Solly Khoza, 35, were arrested as they delivered the stolen fuel in Kromdraai, Witbank. The fuel tanker used was seized by the authorities.

The duo appeared in the Vrede Magistrate’s Court on Tuesday and is expected to be back in the dock on 24 October.

The kingpin is expected to make his first appearance in the Witbank Court on Thursday before appearing in Vrede with the other suspects later.

Lieutenant-Colonel Philani Nkwalase said 46 suspects have been arrested in connection with the theft of fuel from Transnet in the last three months.

“Now with the additional three linked to this incident, we are sitting at a total of 49 suspects arrested in the country,” he said.