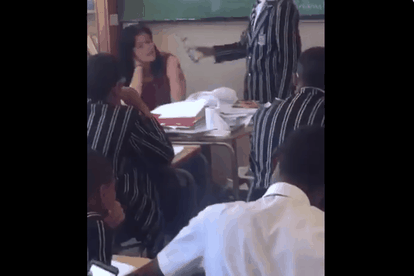 The moment a Grade 9 pupil soaked his teacher with a water bottle. (Twitter screenshot)

The moment a Grade 9 pupil soaked his teacher with a water bottle. (Twitter screenshot)

Kimberley Boys’ School has found itself in the headlines for all the wrong reasons this week after a video of a pupil throwing water at his teacher did the rounds on social media.

It lead to widespread condemnation, but it is perhaps the DA who have issued the sternest reaction. They are now calling for an intervention from SAPS, in order to regain control in Northern Cape classrooms.

The footage shows a learner approaching his teacher. He shocks the entire class when he throws his bottle of water at the member of the schools’ staff. She wrestles the drink off of the boy, slamming it against him. The teacher then leaves the room, with one student asking “what the f*** just happened”.

Given that this altercation was recorded and the classroom was far from under control at this point, the incident appears to have been pre-meditated. The Grade 9 pupil, now facing strict disciplinary measures, may not have acted alone here.

DA Northern Cape Premier Candidate Andrew Louw has drawn a line in the sand on this one. After lamenting
“growing school safety issues” in the province, he hit out at the “blatantly disrespectful behaviour” on show. Louw went on to explain why he felt police intervention was now needed:

“The DA is aware that the Education Department has joined hands with SAPS and Provincial Police Commissioner, Risimati Shivuri, to tackle school safety.”

“We now call on Bartlett and Shivuri to urgently implement an intervention at Kimberley Boys High School to tighten the grip on discipline within the classroom to ensure the safety of teachers and learners, within such a volatile context, is secured.”

“There is no discipline in schools and such blatantly disrespectful behaviour cannot be tolerated. Threatening incidents such as this one, should also not be left to fester.”

Louw also echoed the sentiments of Geoffrey van Der Merwe, the media liaison to the MEC of education. On Monday, van der Merwe implored parents to do more to teach their children about “good values”. The DA representative agrees, stating that guardians and fellow learners must tackle this issue together.