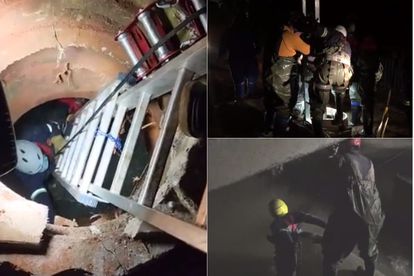 Joburg EMS says that have widened their search for missing six-year-old Khayalethu Magadla who fell into an open manhole while playing with friends. Photo: @RobertMulaudzi / Twitter

Joburg EMS says that have widened their search for missing six-year-old Khayalethu Magadla who fell into an open manhole while playing with friends. Photo: @RobertMulaudzi / Twitter

On Thursday, 23 June, the City of Johannesburg Emergency Medical Services said they are continuing the search for young Khayalethu Magadla. It has been nearly two weeks since the six-year-old supposedly fell into an open manhole.

Other avenues are being explored to locate Magadla’s remains

Joburg EMS says they have no plans to call the search off and that they are exploring all possible avenues to find the little one’s body. Magadla reportedly fell into the manhole while playing with his friends in Dlamini, Soweto.

A team made up of rescuers, divers, engineers and technicians have faced numerous challenges since the search began. According to reports, the latest issue faced was that of another hidden manhole that needs to be found.

The team of over 30 people are in the final and most important stage of the search for Magadla. It has been 12 days since the search began and reports state that fatigue is setting in.

Spokesperson for the Joburg EMS Robert Mulaudzi said the search had been widened. According to Mulaudzi, their search moved to the split chamber at the Olifantsvlei Water Treatment Plant. This is believed to be the last point in the sewer system where Magadla’s body could have been taken.

“We have requested our colleagues from the South African Police service to sweep the whole area where there’s reeds, then we’ll be satisfied that we’ve done our utmost best,”

EWN reported that Magadla’s family are holding on to the hope that they will find the remains of the six-year-old. Due to the period of time his body has been trapped in the waste-infested water, there are concerns that have been raised over the state of his body.

Search for Khaya Magadla continues on Saturday: ‘There is still no body’

Previously, it was reported that the search for the missing six-year-old, Khayalethu Magadla, who fell into a manhole while playing with his friends in Dlamini Park, continues.

Rescue teams hinged on the hope that specialised robots might assist in locating his body as the operation in Soweto went into its fifth day on Friday, 17 June. Joburg Water spokesperson Seipati Nyawuza said technicians went into the second section of the pipeline using an external air supply system.