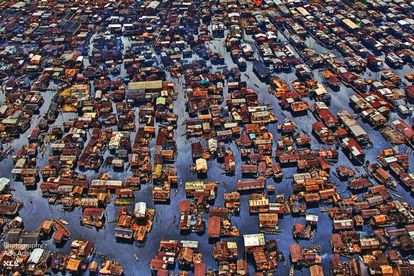 Feel it, Nigeria’s time is here…these water communities in Lagos may not be ready for their close-up, but Nigeria is coming

Feel it, Nigeria’s time is here…these water communities in Lagos may not be ready for their close-up, but Nigeria is coming

South Africa’s 200-year run as Africa’s largest economy may be drawing to a close, as the continent’s demographic powerhouse, Nigeria, surges into the position.

Nigeria’s rise is in some ways roughly analogous with China’s 30-year journey from a place where a sixth of the human race’s energy and talent languished inside a rigidly Communist state to an increasingly wealthy regional – and then global – power.

The small country (only 75% as large as South Africa – and that’s including South Africa’s vast semi-deserts) has two-thirds more hard-working citizens. Hard-working, that is, if only they had a job to do. Finally, in the very recent past, this has changed, as the talent and energy of Nigerians – which is to say, 1 in 7 Africans – has broken out of the economic straitjacket that has held them since Independence.

For the moment, to be sure, Nigeria’s economic growth continues to be top-down, driven by its main export, oil. The government will in four weeks complete a rebasing of the country’s gross domestic product (GDP) which is liable to expand the size of the economy (through more accurate measurement) by up to two thirds.

Currently, South Africa’s economy is 1.4 times the size of Nigeria’s. The central African region power’s total domestic product in a year amounts to about R3 trillion.

While the discovery of some of the planet’s richest diamond and gold reserves in South Africa in the 1860s and 1890s catapulted the country from a dusty agrarian colony into a suddenly worthwhile one, Nigeria’s epic stroke of luck has been mostly a curse. The country that is Africa’s largest oil exporter actually saw its GDP per capita dip after the large-scale extraction of oil began, and this situation held for decades. Nigeria is still taught in first-year economics classrooms as a classic example of ‘Dutch disease’ – when the success of a single export, very often oil, so boosts a national currency that all the other sectors of the economy become uncompetitive and wither away.

Nigeria’s 7 per cent annual growth over the last few years may, then, have put it within striking distance of Mzansi’s economy, in absolute terms, but the average South African is still the richest in any major continental sub-Saharan African economy, while the average Nigerian – although no one goes hungry anymore – still struggles to make ends meet.

Nigeria’s growth is good news in immediate terms for South Africa, as our corporates have excelled at bringing goods and services to wealthy and middle-class Nigerians. The growth of a market on our doorstep with a population estimated to reach 0.5 billion – yes, half a billion Nigerians – by the 2050s is a great thing for South Africa’s economy, which knows how to make and market services and goods that Africa’s elite wants to buy. But the growth rate of a country still challenged by a deep culture of corruption and crumbling infrastructure (we’re still talking about Nigeria here, by the way) shows up plenty about how grindingly slow South Africa’s growth is, in comparison.

The private sector like to complain about a lot of things, but when it comes to labour laws, they’re bang on the money: South Africa’s labour law system is staggeringly ambitious in its bid to place human dignity and security at the centre of the economy, but our middle-income competitors – from Istanbul to Kuala Lumpur to the capitals of South America – simply don’t; for them, the old rule that first-world labour law must wait for an integrated, competitive first-world economy holds. Hiring and firing in South Africa remains difficult, as does starting a business, as does cleanly bidding for government tenders. We, as Africans, should rejoice that the vast slumbering giant of central Africa is awakening, and look forward to the highways and freight trains that will one day carry Cape wines, Karoo mutton and Eastern Cape cars north. But we should worry deeply about why we are not on the same steep upward journey ourselves.

Nigeria moves into the driving seat — Rencapman tells us why