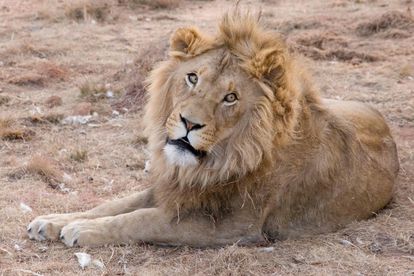 After almost a month on the run, the lion which escaped from the Karoo National Park has eventually been recaptured.

Resident of Beaufort West in the Karoo were warned of a lion on the loose, which had managed to escape the National Park on 15 February. While farmers and locals claimed to have seen the elusive predator, its exact location remained unknown – resulting in a general uneasiness amongst community members.

Karoo lion living off the land

Speaking to Lester Kiewit on Cape Talk Radio, a representative for SanParks, Rey Thakhuli, explained that after an extensive search, utilising ground trackers and aerial support teams, the missing lion was discovered on Wednesday. Incredibly, the lion had travelled almost 200 kilometres to the outskirts of the small town of Sutherland. Thakhuli said:

“We must congratulate the rangers and the trackers who went out for a period of 27 days to try and find this lion. We sighted the lion and we darted it from the helicopter, about 20 kilometres away from Sutherland.”

Thakhuli has thanked the surrounding farmers who had assisted with the search, allowing rangers onto their properties and providing valuable information regarding sightings and spoor. While recapturing the lion took one tranquiliser dart from above, the protracted search was a mammoth task, which saw rangers braving the elements. Thakhuli explained:

“[Tracking] wasn’t easy at all. We tracked from the spoor was. We got a call from one of the farmers to say the lion has been spotted – we had a helicopter on standby – we took off and picked up a vet and darted the animal.”

The lion, which may be renamed ‘Rocky’ – owing to the rough terrain it traversed while on the run – is due to be transported back to the Karoo National Park. During its taste of freedom, the lion dined on gemsbok and sheep, with the carcasses adding to the clues.

As if losing its freedom on the wide-open Karoo landscape wasn’t disconcerting enough, the roaming lion is currently being kept in a holding cell at the Calvinia police station, while awaiting appropriate transport back to the National Park. Clearly, if you’re a mane fugitive in the Karoo, you get hit with the full might of law.