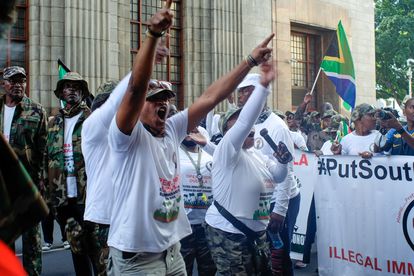 Operation Dudula members shouting at people and businesses they suspected of being foreign at the group’s Cape Town launch in May 2022. Photo: Storm Simpson/The South African.

Operation Dudula members shouting at people and businesses they suspected of being foreign at the group’s Cape Town launch in May 2022. Photo: Storm Simpson/The South African.

The South African government condemned the actions of “some citizens” who have been denying patients access to healthcare facilities at Kalafong Hospital in Atteridgeville, Tshwane. Anti-foreigner group, Operation Dudula, has been protesting outside the hospital and allegedly harassing migrants for the last few weeks.

The implicated citizens have been preventing patients from accessing Kalafong Hospital “based on the colour of their skin and the language spoken,” said the Government Communication and Information System (GCIS) in a statement.

This denial of access goes against the tenets of the South African democracy, said the government.

“In South Africa, the right to access basic health services is a basic human right that is guaranteed by the Constitution. South Africa is governed by the rule of law, which makes provision for every person in the country, regardless of their nationality or documentation status to access healthcare,” said Williams.

As previously reported, the humanitarian group, Doctors Without Borders (MSF), said Operation Dudula members have been protesting outside Kalafong Hospital for more than three weeks.

Puleng Tau, the group’s chairperson in Atteridgeville, told a local publication Operation Dudula believes migrants are taking up medication and space in government hospitals. The group is planning similar protests at health facilities across Gauteng.

MSF said the group was turning patients away based on their accents and placing the hospital – which has distanced itself from the protest – under immense pressure.

The government stressed that the victimisation of patients and hospital staff who are foreign should be condemned by all.

“Preventing access to healthcare can have dire consequences to patients and have a negative impact on the public health system and to citizens at large,” said Minister in the Presidency, Mondli Gungubele.

He said the public healthcare system was overburdened due to “a myriad of challenges.” Nevertheless, healthcare workers have an obligation to provide healthcare to people in need.

“The Hippocratic Oath guides the actions of doctors, which includes them not withholding services because of religion, nationality, race, politics or social standing. Government is hard at work to improve our healthcare system and deal with challenges,” concluded the Minister.

There is an increasing trend of migrants being denied access to healthcare services by staff at facilities, according to MSF.