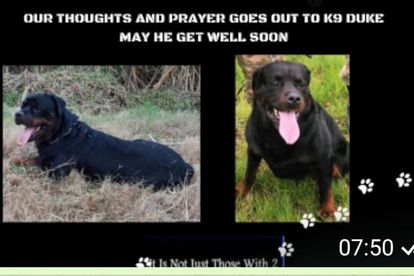 SAPS K9 member Duke was admitted to a veterinary hospital in Hilton after he was shot in the head during a police shootout with suspects on Monday.

SAPS K9 member Duke was admitted to a veterinary hospital in Hilton after he was shot in the head during a police shootout with suspects on Monday.

Duke the Durban SAPS K9 unit dog is up and about and doing well after being shot in the head during a police shootout with suspects on Monday.

Three suspects were killed and two K9 Unit dogs lost their lives in the gunfire. Shaka from Shongweni K9 was shot dead in the line of duty and Simba from PMB K9 Unit was also shot and killed.

A video of Duke’s handler airlifting him to a vet in Hilton was shared on social media. Watch the video here:

And the good news this morning came when a  photograph of Duke was shared on social media with the caption: “K9 Duke is up and about this morning.”

Andreas Mathios, a local videographer, who donated Shaka to the Durban K9 Unit was devastated to hear of his loss and posted the following photograph of him as a puppy (right below):

Mathios said his police handler loved Shaka from the moment he met him.

“We knew the risks as a family and Shaka was a fearless protector who protected his handler many times. He will be remembered for his bravery and fearlessness,” Mathios said.

SAPS spokesperson Colonel Thembeka Mbele said that police officers and K9 members had hunted the wanted suspects from 8am on Monday.

“The police officers were following up information about the suspects who were wanted for the killing of the Ndwedwe Acting Station Commander Lieutenant Colonel Jabulani Ndawonde who was killed last month by the ruthless killers,” Mbele said.

“The information led the police to Maqongqo, an area which falls under Bishopstowe policing precinct in Pietermaritzburg, where four suspects were seen travelling in a vehicle. The police tried to intercept the suspects but they were met by a hail of bullets. During the gun battle, the suspects abandoned their vehicle and fled into the sugarcane fields,” Mbele said.

“Two suspects were fatally wounded during the exchange of gunfire. A canine was shot dead and the other two canines were rushed to a veterinary clinic after they were shot by the group of thugs. Another suspect was found dead in the sugarcane fields. Two rifles and four pistols were recovered at the scene. The investigation conducted revealed that the suspect’s vehicle was stolen,” she said.

Mbele said the suspects had been positively linked to the murder of the police officer as well as other string of murder cases committed in KwaNdengezi and surrounding areas.

“The police are still searching for the remaining suspect,” she said.

KwaZulu-Natal Provincial Commissioner, Lieutenant General Nhlanhla Mkhwanazi said the recovery of the firearms was a testimony that the police were turning the tide against crime.

“We will make sure that we hunt all the criminals who are terrorising the citizens of this province,” he said.