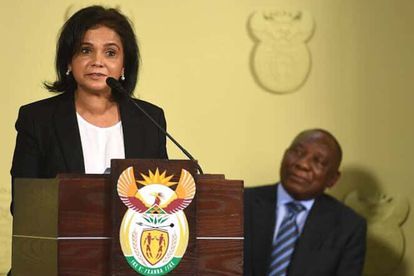 National Director of Public Prosecutions (NDPP) Shamila Batohi has taken a firm stance against corruption, saying it is now time for justice to win the fight against the scourge.

“Justice must win,” said the NDPP boss who was appointed to the top post in December 2018 following a gruelling interview process that was a culmination of a Constitutional Court directive in August for the appointment of a new NDPP within 90 days.

Addressing media on her first day in office in Pretoria on Friday, Batohi said the country is reeling from corruption and impunity.

She said there has been a dark cloud hanging over the National Prosecution Authority (NPA) in recent years.

The organisation cannot have a situation where prosecutors are for sale, she said, adding that she was returning to the organisation at a time of crisis.

Read – Shamila Batohi: Why the new NDPP was previously sent for anger management

Batohi, who is the country’s first permanently appointed woman NDPP, previously served as the first regional head of the Directorate of Special Operations in KwaZulu-Natal. Prior to her appointment to the top post, she had served as Senior Legal Advisor at the International Criminal Court (ICC).

He was, however, delighted with her appointment.

“It is a celebratory moment, we welcome fresh blood in the organisation,” said the Minister.

He said he had already held a meeting with Batohi and Police Minister Bheki Cele.

Quizzed about which pressing cases she will deal with first, Batohi said all the cases on her desk are important.

“I have not been properly briefed yet since it’s my first day in office, there have been revelations with regards to several cases in the media, all of those seem very important. There are several cases that appear to be very important, in the NPA, law enforcement agencies, police have got to look at when this specialised capacity is put together,” she said.

Read – South Africa’s war on corruption – will anyone go to jail?

She also referred to the ongoing Judicial Commission of Inquiry into allegations of state capture, corruption and fraud in the public sector, including organs of State, led by Deputy Chief Justice Raymond Zondo.

The Commission, known as the Zondo Commission, has heard testimony from an array of personalities revealing the true level of corruption, including allegations of corruption in the awarding of contracts with Bosasa.

It has been alleged that Dyambu Holdings – the parent company of Bosasa – issued millions of rands in bribes to get contracts from the State.

Batohi and Masutha have held discussions on a multi-disciplinary level on the matter.

Minister Masutha said was concerned about “perpetual outsourcing” at the Department of Correctional Services and had asked the management if it had managed to develop capacity in-house.

He was awaiting a report from the National Commissioner of Police Khehla Sitole on the Bosasa contract.

“We have not been able to develop our own in-house capacity to provide catering for our inmates in the big centres where Bosasa has been providing this service. The National Commissioner has advised me, in light of the revelations, they are working on reviewing the whole arrangement and I look forward to report soon from him on the prospects of us extricating ourselves from this,” he said.