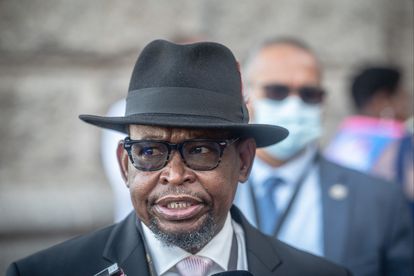 Minister of Finance Enoch Godongwana says he will not step down from his portfolio as the allegations of sexual assault levelled against him are nothing but a smear campaign.

GODONGWANA SAYS HE DOESN’T EVEN KNOW THE COMPLAINANT

Godongwana has been embroiled in a sexual assault scandal where he allegedly sexually harassed a masseuse. The incident allegedly happened at a Kruger National Park hotel while the Minister was on vacation earlier this month.

Police finally interrogated the Finance Minister on Thursday following a request by the National Prosecuting Authority for a warning statement.

Godongwana admits that he was indeed at the Kruger National Park area on 9 August when the alleged incident happened.

But he emphasised that in no way or at any moment did he touch, sexually harass or assault anyone. In fact, he doesn’t even know the complainant, he said in a statement on Thursday night.

He also denies allegations that he tried to silence the complainant.

“I reject with contempt the allegation that I have attempted to silence the complainant by bribing her. As I informed the police, the identity of the complainant is unknown to me. These allegations are unfounded. In the interest of justice, I reiterate my wish that this matter be expedited,” Godongwana said.

“It is unfortunate that these allegations are being used as nothing more than a smear against me, fashioned to achieve narrow and selfish political ends.”

GODONGWANA WILL NOT HEED TO CALLS TO STEP DOWN

Since the allegations surfaced at the weekend, there have been calls by political parties and organisations for the Minister to step down.

But that is not going to happen. Godongwana says he will continue to serve his portfolio as entrusted by President Cyril Ramaphosa.

“While I serve as Minister of Finance at the privilege of President Cyril Ramaphosa, I wish to state that I personally intend on continuing with executing my duties by focusing on the critical tasks of revitalising our economy and protecting the fiscus.”

MINISTER RELEAVED THAT POLICE FINALLY KNOCKED ON HIS DOOR

Godongwana is relieved to have finally been contacted by the police. This gave him the opportunity to be heard on what he is being accused of.

“I am also glad to have the opportunity to place my denial on record. I take the allegations very seriously. As such, I am looking forward to the necessary legal processes unfolding. It is in the interests of all those involved for the matter to be resolved speedily, with due regard for the dignity and privacy of the complainant and myself.”

The sexual assault charges he faced were a talking point at the ANC’s integrity commission meeting on Wednesday.

Godongwana says he subjected himself to the integrity commission of the party as the meeting was at his request.

“I did this because I am painfully aware of the damage that the allegations have caused to the organisation which I have served for close to four decades, as well as for the need to be forthright and transparent.”

“As I have said before, I have always upheld and respected the rights and dignity of women, and these allegations go against everything I stand for. As a public official leading a critical government department, I take the allegations very seriously.”