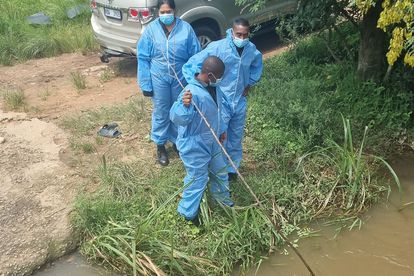 The body of the two-year-old boy who was swept away in a river in KwaZulu-Natal was found on Tuesday evening.

THE FAMILY OF THE BOY FOUND HIS BODY

According to Reaction Unit SA (RUSA) spokesperson Prem Balram, the boy’s little body was discovered by his family in the dense vegetation along the river bank on Tuesday evening.

“A resident contacted RUSA requesting assistance after they failed to locate the child who was standing on the edge of the river while his father washed his Toyota Fortuner.

“Reaction Officers were dispatched to the location and on arrival met with the father of the boy who explained that the child was standing next to the vehicle which was parked on the edge of the river. He was busy washing his vehicle when he lost sight of the child. The boy was suspected of having been swept away,” Balram said.

THE OFFICERS WERE DISPATCHED AT 13:57

He said a search was immediately launched but was called off late in the afternoon due to bad weather but it is believed the family of the boy continued searching for him.

The SAPS K9 Search & Rescue Unit was on the scene and searched for the toddler in the river with a specialized dog.

Meanwhile, an unidentified man was still missing after he had been washed off rocks by waves in Port Edward.

According to Gert du Plessis, the National Sea Rescue Institute (NSRI) Port Edward station commander, the incident happened at around 17:36 on Saturday.

“The NSRI were activated to reports of a drowning in progress at Splash Rock where an unidentified man had been washed off rocks by waves.

ALSO READ: Man missing after washed off rocks by waves in Port Edward