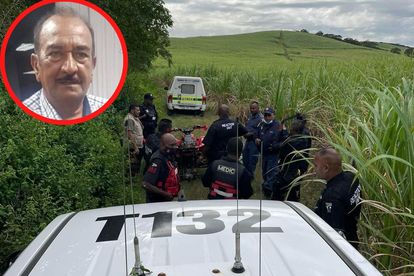 Just in: BLOODIED body of Former KZN Mayor found after being targeted in farm attack on Wednesday. Photos: RUSA

Just in: BLOODIED body of Former KZN Mayor found after being targeted in farm attack on Wednesday. Photos: RUSA

The bloodied body of the former KZN Mayor was found in a cane field opposite his homestead in Canelands on Thursday morning.

This comes after the one-time Mayor of Verulam Manna Naidoo (74) was allegedly abducted as part of a rushed farm attack on Wednesday.

According to Reaction Unit SA (RUSA) spokesperson Prem Balram, Naidoo’s bullet-riddled body was recovered by a search team who were patrolling the cane fields.

“An intense search was conducted by members of Reaction Unit South Africa (RUSA), the South African Police, Community Organisations and Civilian Volunteers throughout yesterday and resumed this morning. He appears to have been shot multiple times.”

‘HE APPEARS TO HAVE BEEN SHOT MULTIPLE TIMES’

Officers who arrived at the scene on Wednesday noticed that four firearms had been stolen from the safe, and Naidoo’s house keys were still at the property. His Toyota Hilux with registration NJ 777 had also gone missing.

“Naidoo’s emotional family contacted Reaction Unit SA at 12:29 for assistance after they discovered his home on Panere Farm unlocked and four firearms missing from the safe.”

“His white Toyota Hilux single cab bakkie with registration NJ 777 cannot also be located. Reaction Officers conducted a search of the property and located his house keys left behind at the premises,” Balram said.

The roads leading to the farm have been extensively damaged by recent floods in KZN. Security teams had to abandon their vehicles and walk several hundred metres to the victim’s house.

HIS TOYOTA HILUX WITH REG NJ 777 WAS STOLEN

Police could not yet confirm the incident or provide more details.