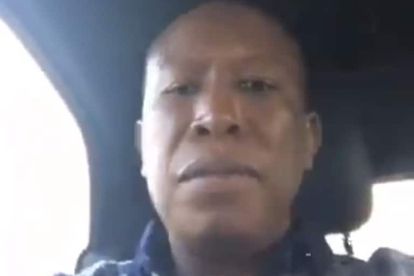 The video, filmed by Malema himself, is in response to footage obtained during a party last week which seems to reveal a tipsy Commander in Chief swaying to the sounds of the celebration. Malema, who has denounced the consumption of alcohol, hit back at those trying to turn his revelry into a scandal by singling out Gigaba’s now infamous ‘sex tape’.

Was Julius Malema drunk, does it matter?

He looks familiar @AdvBarryRoux @tumisole @Julius_S_Malema @MbalulaFikile but it can’t be Juju cos Juju doesn’t do alcohol and this guy looks like he’s drunk pic.twitter.com/JltKBL0jZu

In the original clip, Malema can be seen enjoying himself in a cordoned-off section of a party. Towards the end of the short video, the controversial politician seems to stagger at the entrance to the VIP section, using a nearby pole to steady himself.

The video clip went viral on social media, garnering various responses from supporters and detractors alike. Some social media users questioned Malema’s inebriation by pointing to the leader’s commitment to sobriety as a reason for his much-publicised weight loss efforts.

Others argued that the Commander in Chief remains free to do as he pleases while celebrating and that his occasional consumption of alcohol has no bearing on his leadership capabilities.

Malema, who is often in the media’s spotlight for his controversial rhetoric, may be feeling a bit left out due to all the attention Gigaba’s been getting over the last week. The Home Affairs minister is embroiled in various political scandals, the magnitude of which has not been witnessed since former president Jacob Zuma’s dubious tenure.

Yet, attempts by social media users to bring attention to Malema’s alleged drunkenness, have birthed a humorous response by the leader of the red berets.

As reported by The Citizen, Malema hit back at his detractors by saying:

This is in reference to a video which emerged last week showing the Home Affairs minister engaging in lewd sexual behaviour. Gigaba has said that video footage of the solo sex act was intended for his wife’s eyes only, and has been unsuccessfully used as blackmail.

Malema’s singling out of Gigaba adds insult to injury, as the embattled minister faces serious repercussions for lying under oath, violating the constitution and being implicated in a recent state capture report. As a result of these misgivings, it’s likely that Gigaba’s days in office are numbered.