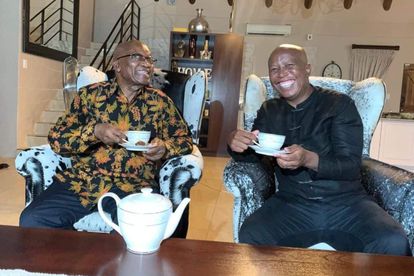 Malema said that while Zuma should rightly be held accountable for the crime the Constitutional Court convicted him of, there is no reason for him to remain behind bars.

Speaking to Kaya FM on Tuesday 20 July, Malema said that Zuma could pay for his crimes as effectively from his home in Nkandla as he is currently doing from behind bars at Escort prison in KwaZulu-Natal (KZN)

The EFF leader said that Zuma’s advanced age is reason enough to offer him the opportunity to be incarcerated at home, adding that the corruption-accused former President poses no real threat to society.

“Ours is a correction service. What do you want to correct with a 80-year old? Because we correct you and re-integrate you back to society to make a contribution – that is why we spend money on you. So, to spend money on an 80-year old is a wasteful expenditure,” he said.

“Zuma won’t come back and be useful anyhow to society.”

Malema said that should Zuma be afforded such an opportunity, justice will still have been seen to have been done.

“So, you can have him arrested, but place him under house arrest. You’ll still get the same results,” he said, adding that he remains of the opinion that his former comrade should be punished for the crimes he has been found guilty of.

“I want Zuma held accountable. I fought with him when it was not fashionable. All of these ones that are going after him are peacetime heroes – very scared of him by the way,” he said.