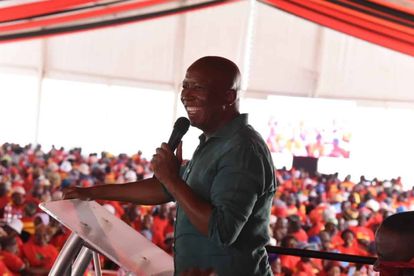 It’s been an explosive start to the working week. Julius Malema failed to show up in court on Monday, and he got the full Jacob Zuma treamtent: The political firebrand was issued with an arrest warrant, and the trial to determine whether he’s guilty of a serious offence or not has started with a misfire.

Juju is accused of firing a rifle into the air during an EFF rally in 2018. However, he has maintained his innocence, and denies that he know the firearm was actually a real gun. But with the courts breathing down his neck, we’ve decided to break the case down – and look at where we go from here.

First of all, let’s get to grips with the charge sheet Julius Malema is facing. He’s accused of committing a total of five offences. Firing a gun in a public place kicks a hornet’s nest of criminal offences, and the politician is, amongst other thigs, accused of “reckless behaviour”.

The Firearms Control Act (FCA) states that a person convicted of an offense under its provisions may be subject to a fine or imprisonment. Sentences for contravening these laws begin from a two-year stretch, and extreme cases can come with a life term. The latter is out of the question for Julius Malema, though.

Try and work his reaction out, though…

We do have a reaction from Julius Malema, but it’s less than formal. In fact, it’s incredibly cryptic. It’s just a screenshot of a meme posted by a popular Nigerian social media page. The theme of the post seems to be Juju complaining that the authorities “won’t leave him alone”. Still, not an easy one to decipher. We are expecting an official EFF statement on the matter later in the day.

Julius Malema – what happens next, and when can he be arrested?

The all-important question is, quite simply, will Julius Malema be arrested? Well, SAPS won’t be in a rush to break his door down any time soon. The arrest warrant only comes into effect from 8 May. Should the EFF leader fail to appear at the East London Magistrate’s Court on this date, he can be legally detained.

With Jacob Zuma’s arrest warrant set for 6 May if he dodges court, there is the possibility that both men could be arrested in the same week. On Monday morning, the case was also postponed for the state to provide the defence with the docket contents and a video footage taken on the day. It’s going to be a difficult task for Malema to get away with this one.