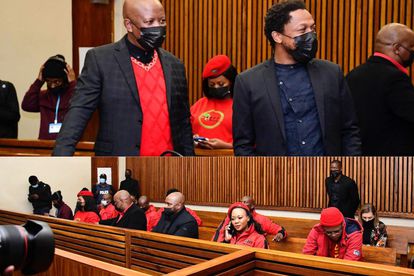 EFF leader Julius Malema and Commissar Mbuyiseni Ndlozi are in the Randburg Magistrates’ Court for judgement on Friday. Photos: Twitter

EFF leader Julius Malema and Commissar Mbuyiseni Ndlozi are in the Randburg Magistrates’ Court for judgement on Friday. Photos: Twitter

The 2018 assault case of a police officer has loomed over the heads of EFF leader Julius Malema and Mbuyiseni Ndlozi like a dark cloud. However, the duo are in the Randburg Magistrates’ Court on Friday hoping the cloud dissipates as judgement is expected to be served.

The Commander-in-Chief and Head of Political Education are flanked by EFF supporters and leadership while they make their court appearance on Friday.

Malema and Ndlozi were caught on video in an altercation with Lieutenant-Colonel Johannes Venter in April 2018 at the Fourways Cemetery during the funeral of late struggle stalwart Winnie Madikizela-Mandela.

However, throughout the case, both have challenged the allegations and continue to tout their innocence. Malema and Ndlozi claim that Venter tried to stop them from entering the cemetery and that they were simply defending themselves.

Both Malema and Ndlozi have claimed the charge is part of a political character assassination agenda.

A CASE OF DELAYS THAT COULD END TODAY

This assault case against Malema and Ndlozi has been riddled with multiple delays but judgement is expected to be handed down on Friday.

The numerous delays included proceedings being postponed last December after one of the attorneys exhibited Covid-19 symptoms and again in April this year after a state witness told the court she was unwell and unable to attend.

Again in May when the court ruled against any further postponements in the case after the same witness failed to show.

The presiding magistrate said during court proceedings at the time, that no excuse or explanation had been provided by the witness to justify their absenteeism. The assault case against Malema and Ndlozi has been ongoing for a couple of years thus resulting in the magistrate giving the State a tongue-lashing over the drawn-out proceedings.