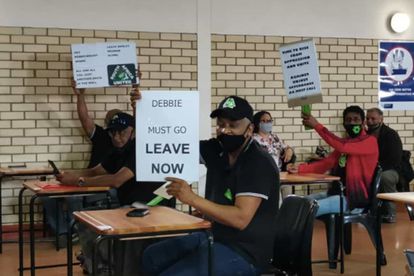 Heathfield High School Principal Wesley Neumann’s application to interdict his disciplinary hearing with the Western Cape Education Department (WCED) was heard on Tuesday 27 October 2020. The WCED, who opposed the interdict with “comprehensive papers,” said the judgement was reserved until next week.

Neumann faces multiple charges after he, earlier this year, refused to reopen the school amid the COVID-19 infection peak. While it has been a violation to some, others have praised him for protecting students and teachers.

WCED Director of Communications Bronagh Hammond said arguments from both sides were heard during the Neumann interdict hearing on Tuesday.

Earlier this month, Hammond said statements that the Labour Court granted Neumann an interdict against the WCED was false.

“Mr Neumann’s application to interdict his disciplinary proceeding for an indefinite period will still be heard. This was done by agreement between our lawyers and the lawyers for Mr Neumann.  We, therefore, welcome the decision by the Labour court to postpone Mr Neumann’s court application,” said Hammond.

Congress of South African Trade Unions (Cosatu) and other affiliates also released a statement blasting the education department for the irregular extension of the appointment contract of their HOD Brian Schreuder after the Public Service Commission (PSC) found the extension to be illegal.

Cosatu Western Cape  Provincial Secretary Malvern de Bruyn said when principles dared to stand up for their teachers, learners and the schooling community in addressing the fears and concerns related to teaching and learning in overcrowded and inadequate schooling facilities during COVID-19, the HOD and MEC, resorted to bully tactics.

“In the crossfire was a Heathfield High Principal, Mr. Wesley Neumann, who is disputing disciplinary procedures against him. The principal is faced with multiple charges that was brought against him of which one was his refusal to open up the school during the peak of COVID-19,” he said.

“Mr. Neumann has taken the WCED to court, challenging the illegal appointment of Mr. Schreuder and to test the legitimacy of the decision by the WCED, and by default Mr. Schreuder to charge him,” he added.

On Tuesday, Neumann’s interdict challenge was live-streamed from the hall at the Heathfield High school. His supporters, as well as, members of Cosatu gathered in the hall to back the principal.

A petition also exists on Facebook that members of the public can sign to show their support. The petition reads; “We support Wesley Neumann in his fight against the WCED in their witch hunt against him. Mr Neumann was simply staying true to his principles and beliefs about the safety of the educators and learners during the COVID-19 pandemic.”

“Please sign this petition to show your support for Mr Wesley Neumann against the WCED acts of victimisation and bullying,” it adds.

De Bruyn said Cosatu supports Neumann because he is a member and because he was concerned about the safety of his learners and teachers.

A message of solidarity was also posted to Neumann’s timeline on Facebook on Tuesday. It read;

“We are with education activists at Heathfield High expressing solidarity with our young, dynamic and dedicated principal, a source of pride of our generation, Mr Wesley Neumann as we await the start of his virtual hearing in the Labour Court in light of the Western Cape government’s bullying and victimization of Mr Neumann as he fought for the safety of learners and equality as we pursue justice in education in our province,” it said.

“This same provincial government undermines the Public Service Commission’s finding that extension of the Education Head’s contract was irregular – these bullying tactics against teachers are part of the strategy to cover up their disregard for the rule of law, transformation and quality education for all. We are Wesley Neumann and Wesley Neumann is us!” it added.