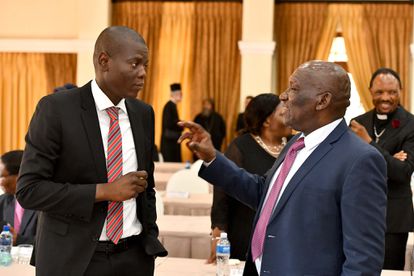 The 4-day interview process used to help decide who gets recommended as the country’s new Chief Justice, did not go off without a hitch. In fact, there were several occasions where the focus during Deputy Chief Justice Raymond Zondo’s interview, wasn’t even on him. Just ask EFF leader Julius Malema and Justice Minister Ronald Lamola. The pair ended the day screaming at each other, with Lamola calling Malema a liar.

Yes, it really did get that messy.

Ronald Lamola vs Julius Malema: From Youth League to enemies?

One of Deputy Chief Justice Raymond Zondo, Supreme Court of Appeal President Mandisa Maya, Gauteng Judge President Dunstan Mlambo and Constitutional Court Justice Mbuyiseli Madlanga, will be named the new Chief Justice. While most of the interviews ended without major fireworks, it was Zondo’s that ended with plenty of bombs going off on Friday.

It all started when Zondo revealed that he had received a letter from Lamola (in his role as Justice Minister) to enquire about Judge Presidents getting an opportunity to act on the Constitutional Court. Lamola had asked Zondo whether he could consider giving Gauteng Judge President Dunstan Mlambo an opportunity to act on the court. Mlambo is also one of the four remaining candidates for Chief Justice.

Zondo says he told Lamola that he could not, as he had already confirmed the acting placements for the court’s next term. Malema asked Zondo if it was the norm for the Justice Minister to make recommendations about who should act on what court.

Zondo revealed that it wasn’t and Malema swooped in.

As Malema then turned his attention to Lamola, things escalated. Lamola even went as far as reading out the section of the constitution that allows for the Justice Minister to make recommendations.

Malema didn’t back down and things boiled over. Watch how it played out below.