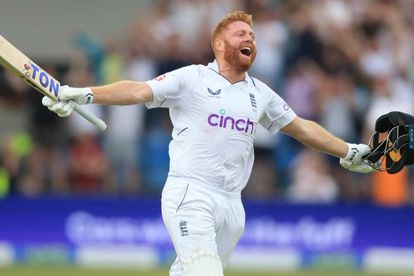 England’s Jonny Bairstow has been ruled out of the final Test against SA and next month’s T20 World Cup after a “freak accident” playing golf. Photo: AFP

England’s Jonny Bairstow has been ruled out of the final Test against SA and next month’s T20 World Cup after a “freak accident” playing golf. Photo: AFP

England’s Jonny Bairstow has been ruled out the final Test against South Africa and next month’s T20 World Cup after a “freak accident” playing golf.

Just hours after being named in England’s T20 World Cup squad, Bairstow was forced to withdraw after suffering a possible broken leg when he slipped while walking to a tee box at the Pannal Golf Club near Harrogate.

The 32-year-old’s bizarre injury is a huge blow to England’s hope of winning both the South Africa series – currently level at 1-1 – and the T20 World Cup in Australia.

The Yorkshire batsman had been in superb form this year, scoring 1 061 runs, including six centuries, in 10 Tests, while playing a key role in England’s white-ball teams.

“Jonathan Bairstow has been ruled out of the rest of the summer and the ICC Men’s T20 World Cup after sustaining a lower limb injury in a freak accident whilst playing golf on Friday in Leeds. He will see a specialist next week to ascertain the full extent of the injury,” a statement from the England and Wales Cricket Board said on Friday.

Bairstow took to Instagram to comment on the incident, which will need surgery and could be serious enough to put his participation for the rest of the year in doubt.

“Unfortunately I am going to be unavailable for all games/tours in the immediate future. The reason being is that I have injured my lower leg in a freak accident and it shall need an operation,” he wrote.

“The injury came when I slipped on the golf course this morning. I am gutted and want to wish everyone for this week at The Oval all the best firstly, and the boys that are going to Australia for the T20 World Cup. Absolutely gutted! I will be back…”

England director of cricket Rob Key had revealed earlier on Friday that Jonny Bairstow was due to open the batting alongside Jos Buttler at the T20 World Cup.

That move was prompted by the decision to drop the out-of-form Jason Roy, but England will now have to rethink their plan after Bairstow’s untimely slip.

Surrey’s rising star Will Jacks could be in contention to replace Bairstow in the T20 team.

Jacks is in excellent form and has been included as one of five uncapped players in this month’s T20 tour of Pakistan.

The ECB said an announcement about Bairstow’s replacement in the 15-man World Cup squad will be made in due course.

Bairstow’s Yorkshire team-mate Harry Brook is likely to make his Test debut against South Africa at the Oval in place of Bairstow, with Ben Duckett also drafted in as cover.