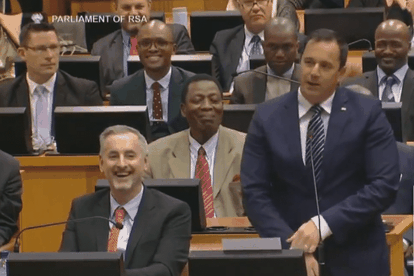 John Steenhuisen was back to his performative best in Parliament on Wednesday, as he put Deputy President David Mabuza in a very awkward position during a Q and A session.

The DA’s chief whip inquired about the Bosasa scandal that the ANC seem very keen to suppress. The security company, now known as African Global Operations, has allegedly been benefitting from some pretty generous government contracts and greasing the palms of those it does business with.

The ANC and Bosasa

News24 report that, since at least 2013, the organisation installed high-end CCTV cameras, alarm systems and electric fencing for the likes of ministers Gwede Mantashe and Nomvula Mokonyane, and deputy minister Thabang Makwetla – all completely free of charge.

Steenhuisen wasn’t ready to let this one slide. In fact, he even took a quick swipe at the ANC for a secret meeting the party held with former leader Jacob Zuma last weekend. It was suspected that pro-Msholozi forces in the ruling party want to oust Cyril Ramaphosa – something which has lead to staunch denials.

However, The DA MP was on the prowl for something more substantial:

“It’s become obvious that Bosasa – a company who have benefited from billions of rands worth of government contracts – has been handing out free security upgrades and other generous gifts to officials of the governing party.”

“None of these gifts have been declared by the members and there have been significant conflicts of interest that have resulted from that. Why has your government, after three weeks of the scandal engulfing South Africa, not uttered a single word about this?” – John Steenhuisen.

Unfortunately, Steenhuisen didn’t get the answer he was looking for. Mabuza continued to duck and dive his way through a difficult line of questioning, ultimately frustrating the opposition party.

“Deputy President, we asked WHY government has not said anything about the Bosasa scandal. We know what systems are in place.” #MabuzaQandA pic.twitter.com/N5dIQuYCwk