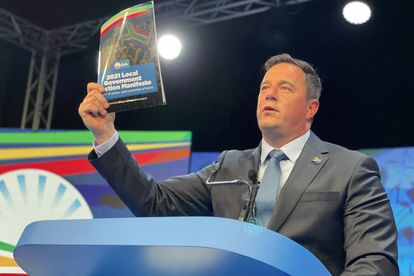 Local government elections are now right around the corner. And if you’re like millions of other South African’s who have no idea who to vote for on the 1st of November, John Steenhuisen certainly thinks he can convince you.

The DA manifesto for the upcoming elections was released this weekend. And the party is making big promises about being the one to make sure “things get done.”
No, seriously, “the DA gets things done” was one of the official themes. The party is looking to play to its governance track record in Cape Town and the Western Cape.

John Steenhuisen and the 7 key promises in the DA manifesto

In any political manifesto, the party involved outlines its focus areas for what it would look to do if it were to secure a decisive victory at the polls.
For John Steenhuisen and the DA, who describe these areas as their “to-do list for local government, it all starts with getting the basics right.

1.Get the basics right

3.Be tough on crime, tougher on the causes of crime

4.Bring jobs and investment to the local economy

6.Adopt a holistic approach to keeping communities in good health

7.Govern in the interests of the people

The DA says its time to ‘evict the ANC government’

While explaining the above 7 promises, Steenhuisen implored voters to “evict” the ANC governments from their towns, and visualise what life would be like if the DA were to take over.

After a very bumpy few years of coalition politics saw the DA gaining and then losing power in the City of Johannesburg, Tshwane, and Nelson Mandela Bay,
the party now says that it will enter coalitions only when viable.

In short, that means any fresh collaboration between the DA and EFF is highly unlikely.

Not convinced? Or want more information on the DA’s promises? You can check out the full manifesto yourself here.