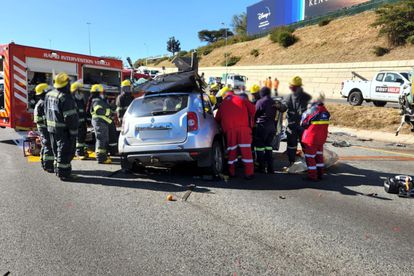 A woman was killed in a collision in Johannesburg on Wednesday. Photo: ER24

A woman was killed in a collision in Johannesburg on Wednesday. Photo: ER24

A woman was killed in an alleged rear-end collision between a car and a truck on the N1 highway in Johannesburg on Wednesday morning, 15 June.

According to paramedic service, ER24, the accident took place before the William Nicol turnoff in Fourways before 10:00.

When emergency responders arrived at the scene, they found the truck and car in the middle of the road.

Medics assessed one of the women and found that she had already succumbed to her injuries. The other woman was in a critical condition.

The Fire and Rescue Service used specialised equipment to free the injured woman from the wreck of the vehicle.

“Once released, the woman was treated and provided with advanced life support interventions before she was airlifted by a private medical helicopter to a nearby hospital,” said ER24.

The driver of the truck, which was allegedly rear-ended by the light motor vehicle, survived the incident without sustaining any injuries.

The relevant authorities are investigating the matter.