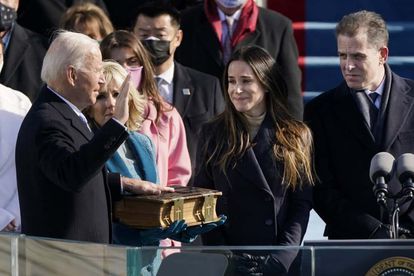 Joe Biden is sworn in as the 46th president of the United States by Chief Justice John Roberts as Jill Biden holds the Bible during the the 59th inaugural ceremony on the West Front of the US Capitol on January 20, 2021 in Washington, DC. Photo: Patrick Semansky-Pool/Getty Images/AFP

Joe Biden is sworn in as the 46th president of the United States by Chief Justice John Roberts as Jill Biden holds the Bible during the the 59th inaugural ceremony on the West Front of the US Capitol on January 20, 2021 in Washington, DC. Photo: Patrick Semansky-Pool/Getty Images/AFP

Two weeks after pro-Trump rioters stormed the Capitol, America reclaimed its citadel of democracy Wednesday with the latest transition of power – but Joe Biden’s inauguration, coming amid unprecedented security threats and pandemic woe, was unlike any other.

For one, his twice-impeached predecessor Donald Trump was absent, having fled Washington hours earlier, leaving Vice President Mike Pence to represent the White House in the two-century-old process that ensures the continuity of government.

Joe Biden sworn in as the 46th president

Also missing: the massive crowds of people who normally converge on the National Mall on Inauguration Day, replaced by thousands of flags representing the 400,000 Americans who have died from the coronavirus, and those unable to attend the inauguration.

The Capitol’s front lawn was in effect deserted, save for a few hundred diplomats, official guests and family who braved high winds, chilly temperatures and a snow shower to see Biden sworn in as the 46th president.

“That mall is not empty,” House Democrat John Garamendi insisted to AFP as he eyed the flag-covered expanse.

Beyond a black metal fence ringing the Capitol grounds, rows of National Guard troops stood at attention, heavily armed sentries preventing any repeat of the violence that rocked Capitol Hill on January 6.

Bleacher seats normally reserved for high-profile guests were one third full on account of social distancing measures that relegated lawmakers like House Republican Jim Jordan and Senator-elect Jon Ossoff to a level below the stage.

Up on the inaugural platform, Marine Corps musicians trumpeted the arrival of Biden, who fist-bumped Barack Obama, whom he served as vice president for eight years.

He also exchanged a few words with incoming Vice President Kamala Harris, who made history as the first Black woman and first person of South Asian descent to rise to the office — and who may be a Pence presidential rival in 2024.

After he was sworn in, Biden – who called for national unity in his inauguration speech as well as for a moment of silence to honor those lost to Covid – made a point of speaking with Senator Mitch McConnell.

The powerful Republican in recent days broke with Trump and warned against efforts to overturn the election.

Ossoff, whose shock run-off election win earlier this month in Georgia helped Democrats seize control of the US Senate, expressed optimism that America’s “bedrock of democracy” will win out despite the recent turmoil.

“We are turning the page on these last four years and now we need to unite this country to defeat this virus and get economic relief to the people,” he said.

For former US House speaker Paul Ryan, a Republican driven out by more rightwing factions of his party in 2018, the security detail was “surreal.”

But he encapsulated what many at the inauguration were no doubt thinking.

“It’s important to pay respect to our process — which stood against tests we’ve never seen in our lifetimes, and it passed those tests.”

BreYhana Johnson, a 23-year-old Senate staff assistant and member of Harris’ historically black Alpha Kappa Alpha sorority, said she was “so grateful” to see Harris make history — and to witness the transition of power after the Capitol riot.

“Even though we went through such an… act of domestic terrorism, the show must go on,” Johnson said. “We’re still carrying on here today and hate is not going to win.”

The ceremony, dramatically scaled back as it was, did include some starpower.

Lady Gaga, clad in a socially distance-appropriate red dress and gripping a gold microphone, belted out the Star Bangled Banner.

And as Jennifer Lopez sang “This Land is Your Land,” she paused to shout out in Spanish: “Justicia para todos!”