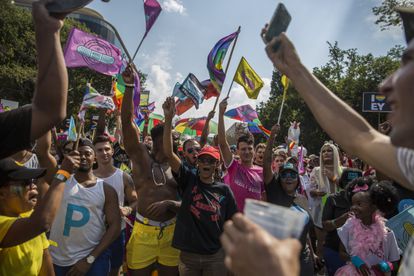 The organisers of Joburg Pride said the march will go ahead in Sandton on Saturday, 29 October, despite an alert about a potential terrorist attack in the area. The organisers said the LGBTQ+ event has not been directly threatened.

JOBURG PRIDE MARCH WILL GO AHEAD ON SATURDAY

The United States Embassy issued an alert about a possible terrorist attack in Sandton over the weekend, on Wednesday.

“The U.S. government has received information that terrorists may be planning to conduct an attack targeting large gatherings of people at an unspecified location in the greater Sandton area of Johannesburg, South Africa, on 29 October 2022.

“There is no further information regarding the timing, method, or target of the potential attack. The U.S. Embassy has advised staff to avoid crowds of people and other large public gatherings in the greater Sandton area of Johannesburg during the weekend of 29-30 October 2022,” read the alert.

The South African government noted the alert and said it was part of the US’ standard communication to its citizens. On Wednesday, the State Security Agency said it had received no information about the alert before the notice went live.

“Threats are assessed continuously and are acted upon to ensure the safety of all. Should the need arise; the South African government will be the first to inform the public about any imminent threat,” said the government.

Speculation about the potential targets of the attack started immediately after the notice was issued. Joburg Pride is one of the largest events in Sandton on Saturday.

According to a News24 report, Pride and a two-week show by Jewish comedian Nik Rabinowitz were among the potential targets of the attack by the Islamic State, according to sources.

The organisers of Joburg Pride said the situation has been assessed over the past 24 hours and after consultations with the relevant authorities the decision was made to go ahead with the march.

“Johannesburg Pride has not been directly threatened, nor have we received any communication from outside parties other than what the media assumed via the US Embassy’s website.

“We have consulted with the various entities, and at this point: postponing pride is hard, proceeding with pride is hard, and deciding whether or not to attend is a hard decision,” read a statement.

The organisers said it would be critical for the LGBTQ+ community to occupy the space and march on Saturday because the community continues to be marginalised despite their Constitutional Rights.

“The threat has provided an opportunity for homophobes to emerge, inciting a series of homophobic comments directed at Pride and our LGBTQ+ community and the reason for our existence.”

Saturday’s event will be the 33rd Joburg Pride march.