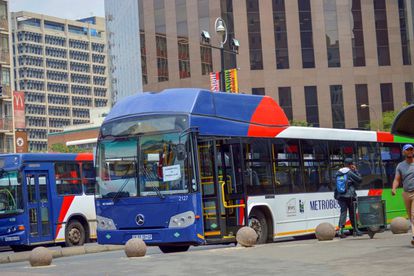 The City of Johannesburg plans to spend R60 million on Metrobuses as their fleet is outdated. PHOTO: Twitter/@CityofJoburgZA

The City of Johannesburg plans to spend R60 million on Metrobuses as their fleet is outdated. PHOTO: Twitter/@CityofJoburgZA

Joburg’s Metrobus is boosted with R60 million to replace their outdated buses which some are as old as 21-years.

The new buses are expected in the upcoming 2023/2024 financial year, said City of Johannesburg MMC for Transport Funzela Ngobeni.

According to accepted international standards, a bus will have a useful lifespan of 12 years. But due to the city’s historic financial challenges, some Metrobus buses have long passed 12 years, Ngobeni said.

“Metrobus finds itself with a significant number of its buses operating that are 15 years and 21 years old.”

Ngobeni says the pressing matter of new buses can no longer be ignored. This is because it forms part of a long-term strategy to renew the entity’s fleet.

“Metrobus is integral to fulfilling the city’s constitutional mandate of providing safe, reliable and affordable public transportation but the company has had to fulfil this mandate under very difficult conditions,” the MMC said.

Metrobus’ Bus Refurbishment Programme has been a success in the past three years. By the end of last month, the entity had entirely refurbished 105 buses. This is more than the targeted 100 buses, said Ngobeni.

This includes 86 of the 15-year-old Mercedes Benz buses and 19 of the seven-year-old buses.

“Not only did we exceed our target for the number of buses refurbished, but Metrobus also spent R49.4 million against a total project budget allocation of R49.8 million – reflecting expenditure to date of just over 99%.”

R60 MILLION IS JUST A FRACTION OF BUS FLEET RENEWAL

It could take about six to ten months for the delivery of the new buses. Metrobus howver required a total of R450 million to renew its fleet.

In the meantime, the procurement of the R60 million worth of buses will begin in the current 2022/2023 financial year.

Ngobeni intends to work with the executive management of Metrobus and the Board for a long-term sustainable solution to bridge the gap between the funds required and those allocated.

ALSO READ: #BusStrike: What services will be affected in Gauteng on Wednesday 18 April?

The city intends on acquiring an automated fare collection (AFC) system to enable Metrobus to remove cash from its buses. This is in order to fully account for the entity’s revenue, said the MMC.

“About R99 million has been allocated for this system in the 2023/24 financial year followed by a further R100 million in the year after.”

“Metrobus’ ability to protect the revenue it collects will allow it sufficient capacity to begin working towards purchasing buses independent of the City,” said Ngobeni.