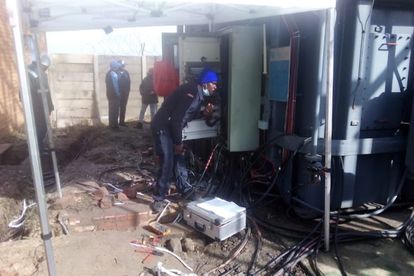 Two security guards working for City Power are involved in copper cable theft at one of the storage facilities. PHOTO: Twitter/@CityPowerJhb

Two security guards working for City Power are involved in copper cable theft at one of the storage facilities. PHOTO: Twitter/@CityPowerJhb

Six people are arrested for cable theft and vandalism of City Power property. But it turned out to be an inside job as two of the suspects, who work for the Joburg power entity, went out of their way to help cable thieves.

Since April 2022, City power has been noting signs of copper cable theft in their storage facility.

But the power entity grew suspicious when there were no signs of forced-entry nor physical armed robbery taking place, City Power spokesperson Isaac Mangena said.

“Preliminary investigation revealed that two security officers were in cahoots with external criminal elements. It was established that the security guards would arrange the thieving and organise the criminal elements to come through the back of the premises.”

These City Power security guards then helped the criminals gain entry through the parameter or make an opening on the face.

“[The security guards would] take them to the copper cables to be cut and stolen. They will also assist them to cut the cables over the fence,” said Mangena.

The security guards as well as three Mozambican foreign nationals were eventually arrested at City Power’s copper cable storage facility in Booysens on Saturday. They are detained at Booysens police station and will appear in court soon.

“We believe they have been doing this for some time, and suspect that there are more internal members involved.”

In a separate incident, another alleged copper thief was arrested in Moffatview. The man was found in possession of three stolen copper cables.

Mangena says these incidents are exacerbated by more loadshedding as the thefts happen when the lights are off.

Just this past weekend, at least 23 incidents of theft of cables, fuses and batteries, as well as vandalism occurred in different parts across the city.

“City Power is pleased with the above results and hope a stiff sentence that fits the crime is produced to serve as deterrent to the cable thieves.”

Last week, a suspect charged with damaging a transformer at City Power’s Jeppe substation was sentenced to five years imprisonment. “This was achieved through the dedication by the South African Police Service investigating officers, the National Prosecuting Authority’s