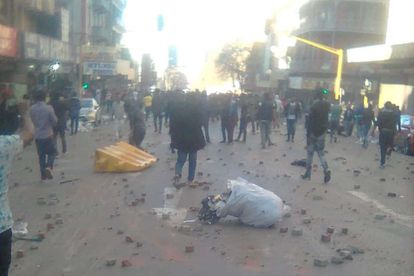 Downtown Johannesburg was plunged into chaos on Sunday when law enforcement officers swooped on vendors of counterfeit goods.

Brigadier Mathapelo Peters, the spokesperson for the Gauteng police, confirmed that a joint operation, in conjunction with the Johannesburg Metro Police Department (JMPD), was thrown into disarray by disgruntled hawkers.

The raid rapidly devolved into a running battle between law enforcement and purveyors of phoney goods, with the latter pelting stones at officers and vehicles.

Police, who focused their efforts on the Madiba Building, on the corner of Jeppe and Von Wielligh in the Johannesburg CBD, lost control of the situation as crowds of dissenters grew ‘rapidly’.

Law enforcement attempted to disperse the riled-up crowd with rubber bullets, which, in turn, was met with further violence.

Peters confirmed that while police vehicles and city infrastructure suffered extensive damage at the hands of the protesters, there had been no reports of injuries to law enforcement officials.

Peters added that the scene, on Monday, still remained tense and that a large contingent of Gauteng police officers were stationed at Jeppe Street and Delvers Street.

Chief of the JMPD, David Tembe, confirmed that the abovementioned roads had been barricaded with rubble and burning debris on Sunday night.

While these obstructions have since been cleared, officials have urged motorists travelling in the area to exercise caution.

Lieutenant-General Elias Mawela, the commissioner of police in Gauteng, condemned the violence towards officers and has vowed ‘punish’ the attackers.

CCTV cameras in the vicinity of the Madiba Building captured the chaos which enveloped the area. The footage, which is now being used to aid law enforcement’s subsequent investigations into the unrest, depicts an urban warzone. Peters explained the significance of the CCTV footage, saying:

“No arrests yet, but police investigations are underway. We have video footage which is being processed and analysed to identify perpetrators towards arrest.”