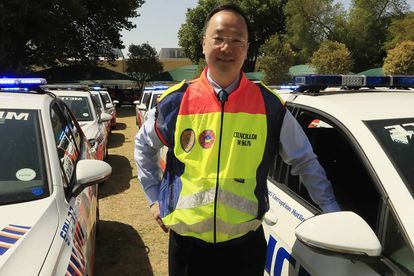 “We will not be outperformed by criminals,” Member of the Mayoral Committee (MMC) for Public Safety, Michael Sun said on Monday, 14 October 2019.

Sun was speaking before he handed over 40 new Volkswagen Golf GTIs to the Johannesburg Metropolitan Police Department’s Special Patrol Unit (JMPD SPU) at the public safety department Headquarters in Martindale.

He was joined by the speaker of council, Vasco Da Gama, and the chairperson of the section 79 Committee, Hilton Masera.

“These 40 new vehicles will be utilised by the JMPD SPU in its daily tasks ranging from attending to accident scenes, rapid deployment to crime scenes, land invasions, dealing with road traffic offences at identified hotspots, visible policing, patrols and events management, amongst others.”

He said at many traffic management hotspots, like the corner of Witkoppen and Main Roads bordering Lonehill and Bryanston, there is a brazen disregard for the rules of the road. Sun shared:

“In the past week, I joined the JMPD SPU’s traffic management operation at this hotspot where 15 minibus taxis were impounded for offences ranging from unroadworthiness to driving unlicensed vehicles.”

“Reckless and negligent driving is a serious safety hazard in Joburg, causing major traffic congestion and accident risks. This is why the City is ensuring that our JMPD officers are fully equipped to deal adequately with any criminality it is faced with.”

Sun said these vehicles need to be safe and support the JMPD officers that perform high risk functions. It should give officers the upper hand when fighting crime in Johannesburg.

The vehicles must be of good quality and have value for money. The city has procured patrol cars that are able to function well in extraordinary situations.

“Given that the last fleet replacement for the JMPD SPU was 5 years ago, these new vehicles will certainly play an integral part in ensuring the safety of our residents. The department will continue to replace and maintain aged and broken vehicles so that the JMPD is able to fulfil their duties to the residents of Johannesburg.”