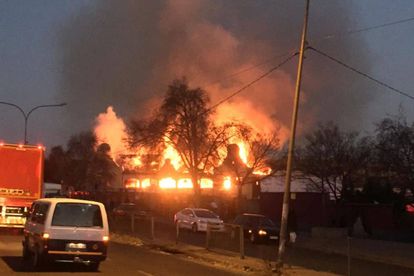 Footage of a fire that has ripped through at least one building in Johannesburg last night has been shared on social media. The dramatic footage shows heartbreaking scenes as residents try to save what they can from the blaze.

Thankfully no injuries have been reported; despite a number of people risking their safety to enter the burning building. Emergency services confirmed that the blaze damaged ten shops in the building.

Emergency services on the scene declared the fire under control after 20:00. They continued “damping down” operations as they continued their efforts to extinguish the fire.

Witness at the scene reported that local residents risked their lives to rush into the burning stores in an apparent attempt to loot the burning businesses.

In contrast, residents of the building above the stores were seen to be throwing what possessions they could save from their windows to those who had already escaped the fire.

“More than 30 people who lived in the building do not have a place to sleep tonight as fire fighters are still trying to stop the fire.”

Sowetan reported that one eyewitness observed that when emergency services arrived at the scene, they had to deal with controlling the residents and would-be looters entering the building before they could attend to the fire.

According to bystanders, the fire began in one of the apartments. It then spread to the adjacent apartments before consuming the whole building.

Cause of Jeppestown fire unknown

Johannesburg emergency services were unwilling to speculate as to the cause of the fire. They are however investigating the matter. People at the scene speculate that an electrical fault could have started the tragedy.

“People were talking about an electrical fault, but we will confirm this with our investigation”.

Sadly some took the Jeppestown Fire as an opportunity to spread misinformation on social media; some attributed the fire to protests by foreign nationals. One Twitter user said:

“Foreign nationals believed to be responsible. They also responsible for looting as residents throw their possessions out Windows to save them.”

Another netizen said, “Foreigners destroying the country”. However, there’s no evidence that the fires have anything to do with protest action.

Thankfully the posts have not gained significant traction. It’s always sad when people try to leverage others tragedies to advance xenophobic agendas.