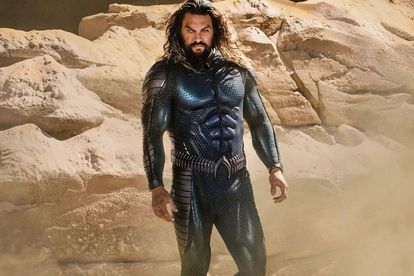 Jason Momoa has unveiled Aquaman’s new “stealth suit” for the sequel. The 42-year-old actor is reprising his role as the titular half-human, half-Atlantean Arthur Curry in Aquaman and the Lost Kingdom, and he excited fans by unveiling his character’s new look over the weekend.

Momoa shared the gold and green costume from the 2018 DC film, and the shiny new metallic blue and silver getup.

Director James Wan has revealed the new suit is inspired by the blue one worn in the 1986 Aquaman miniseries, and that it is made of “Atlantean tech based on cephalopod’s camouflaging ability.”

He added to his own page on the social media app:

Here’s @prideofgypsies in the classic #Aquaman suit AND a sneak peek at his other outfit — the stealth suit. Atlantean tech based on cephalopod’s camouflaging ability. David Leslie Johnson and I were inspired by the 80’s “blue suit.”

The suit unveiling comes after Wan teased that Aquaman 2 is “heavily inspired” by Mario Bava’s Planet of the Vampires. The filmmaker revealed the 1965 Italian sci-fi horror was one of his biggest sources of inspiration for the sequel.

In the classic movie, a team of astronauts begin to turn on each other, swayed by the uncertain influence of the planet and its strange inhabitants. Wan said last month:

Aquaman 2 is very heavily inspired by Planet of the Vampires. You can take the boy out of the horror but you can never take the horror out of the boy.

He also explained that he didn’t want to make the first film in the franchise “dark and heavy” because he wanted to ease people into the “very lurid, strange world”, but he hasn’t held back for Aquaman and the Lost Kingdom. He said:

Well, the first movie took a lot of people by surprise, right? And that’s partially because they were not familiar with the comic book, which deals in this very lurid, strange world. People were taken aback that I didn’t throw all that stuff away and make a dark, heavy film. But I didn’t feel that would have been right for it. So with the second film, I feel it will be easier for people to accept where we go because I’ve already laid the foundation.

Wan previously said that the flick will be “more serious” and “a little bit more relevant to the world we’re living in today” than the previous movie. The Conjuring helmer said:

The movie is scheduled for release in December 2022.