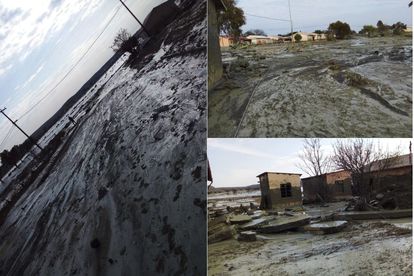 The Free State Government has revealed that 164 houses were damaged following the burst of the Jagersfontein mine dam.

Help has made its way to those in need

Spokesperson for the provincial Government Palesa Chubisi stated that they have identified four sites to erect temporary structures. She explained that samples of the sludge have also been collected and taken for tests.

Chubisi also noted that a temporary food and clothing bank was started. Gift of the Givers has delivered food, blankets, mattresses, bottled water and hygiene items while the Red Cross delivered 80 mattresses.

The tests will determine the risk the sludge has on human life. Since the disaster, 243 people have been assessed by medical practitioners. SABC News reports that a 20-year-old showed signs of ‘undetectable illness’.

The young man is said to have ingested contaminants within the sludge that spread around Jagersfontein and was assessed by doctors. He is currently under observation.

While addressing residents in a nearby town, President Cyril Ramaphosa assured those who were displaced that the Government will rebuild their homes. The President also noted that the cause of the disaster would be investigated.

Mining town residents of Jagersfontein in the Free State have been evacuated from their homes following the collapse of a damn wall on the morning of Sunday, 11 September. At about 6am, the residents were greeted by mudslides infiltrating their homes after a mine dam wall burst – causing it to collapse.

The incident has caused major flooding in this diamond mining town, with roads and properties severely impacted. It is reported that several houses in the nearby Charlesville residential area collapsed.

40 patients were admitted into different hospitals due to the floods and mudslides in the Free State. 35 were transported to Diamant Hospital in Jagersfontein. Among them is a pregnant woman, said Chubisi. The Free State government previously revealed that their initial report of three deaths was incorrect and confirmed that one person died during the floods. Read the full story here.