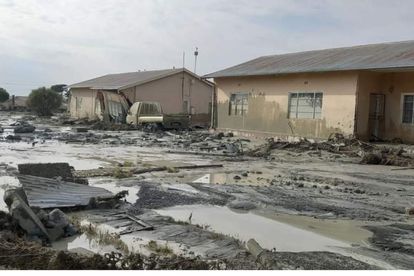 Many residents lost their homes, livestock and belongings as dam water flooded the surroundings.

The dam’s collapse caused some fatalities. There are three deaths and 40 injuries reported.

Another consequence of the wall collapse was the Eskom substation being submerged in mud, reports eNCA. This interrupted the Jagersfontein power supply.

“Eskom technicians worked around the clock to install and energise a replacement transformer at Badplaas substation in Jagersfontein after the Rietkuil substation was destroyed on Sunday when mud burst through a broken wall of a nearby mining dam, flooding the area.”

The power returned to residents before 5am this morning. This means people did not have power for more than 72 hours. Eskom intended to deliver power to Jagersfontein residents by Tuesday.

“Although we aimed to restore supply before midnight on Tuesday, minor complications delayed the recovery process.”

The water supplies returned on Monday after interruption due to the dam – reports News24.

Who is to blame for this?

Jagersfontein Developments (Pty) is accepting responsibility and liability for the wall’s collapse.

They allocated R20 million for disaster relief which includes food parcels and temporary housing for those in need.

The company also said they are going to investigate the cause of the incident to assess whether the collapse was due to negligence.

“The fact that a person died is tragic, [but] we mustn’t now try put the blame on people for what had happened. Let the process continue and get done where after [a] decision will be made, not only by us but by authorities as well.”