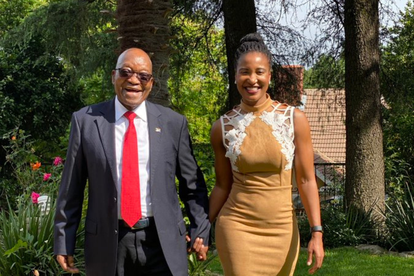 Former president Jacob Zuma welcomed in the New Year alongside family including his daughter. Taking to social media to mark the occasion, the embattled politician’s daughter Dudu Zuma-Sambudla made it clear that the family is walking into 2022 with its head held high.

Zuma’s daughter: No weapon formed against us shall prosper

Zuma is currently facing the possibility of returning to prison after a High Court ruling overturned his medical parole.

Facing a sentence for contempt of court, the ex-president has managed to successfully appeal this ruling. In line with this, Msholozi was able to enjoy the festive season alongside his family.

Zuma’s daughter made it clear that the family remains resolute as the ex-president seeks to maintain the parole granted in light of a mysterious terminal illness.

Certainly, the nature of this sickness has been carefully guarded by the family. No word on what ails the elderly politician has been confirmed despite the ANC titan travelling to Cuba where he reportedly obtained medical treatment.

Indeed, Dudu Zuma-Sambudla seems to be looking forward to a year of family milestones. Sharing a photo of herself and Zuma, she commented that:

“Dad and I are walking into 2022 in high spirits… Dad will be turning 80 years old and I’ll be turning 40 years old. No weapons formed against us shall prosper! Wishing you all a great year ahead.”

‘Unethical’ to send uBaba back to prison

Advocate Dali Mpofu represented politician in his attempt to overturn the decision that may well see him returning to prison.

Speaking during proceedings, Mpofu warned that courts should be ‘reluctant to encroach on executive power’. The advocate explained that it would be unethical to send uBaba back to prison.

Mpofu further argued that the ex-president had not granted himself parole in response to the ruling that Zuma’s time on parole did not count towards his sentence.