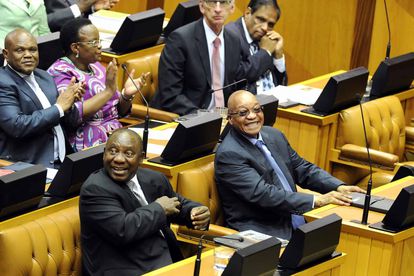 Ex-President Jacob Zuma and then-Deputy President, Cyril Ramaphosa smile during a question and answer session in the National Assembly on March 17, 2016 in Cape Town South Africa. Regarding his relationship with the Guptas, Zuma said, no ministers or deputy ministers were appointed by the Gupta family – Photo: Gallo Images / Beeld / Nasief Manie).

Ex-President Jacob Zuma and then-Deputy President, Cyril Ramaphosa smile during a question and answer session in the National Assembly on March 17, 2016 in Cape Town South Africa. Regarding his relationship with the Guptas, Zuma said, no ministers or deputy ministers were appointed by the Gupta family – Photo: Gallo Images / Beeld / Nasief Manie).

Let’s be honest, you could cut the tension that exists between Jacob Zuma and Cyril Ramaphosa with a knife. They’ve been engaged in something that resembles a low-key “lovers tiff” since JZ made way for his successor in February 2018, and things only got worse at the start of this year.

While talking about the ills of state capture, Ramaphosa had previously labelled the Zuma Administration as “nine wasted years” for South Africa, indirectly criticising Msholozi and his links to the corrupt Gupta brothers.

Over the past few months, Zuma has taken various swipes at this narrative. But on Sunday, he perhaps shared his most furious response yet. In fact, it pretty much came as a bolt out of the blue just a few weeks before the 2019 Elections:

“The narrative by a few individuals in the leadership who claim that there was policy uncertainty in the last nine years spanning the terms of the Fourth and Fifth Administrations – the so-called ‘Zuma nine years’ – is an erroneous and dishonest narrative. Nothing can be further from the truth.”

We think he’s talking about you, Cyril

JZ has – quite obviously – been simmering over these comments for quite some time. He is particularly irked that his reign is being dismissed for “failing to implement policies”. However, these accusations of inaction have not sat well with the 77-year-old: He’s also kakked out the “senior people” of the ANC who have questioned his legacy:

“Statements that there has been policy uncertainty in the last two administrations are dishonest and untrue, particularly if they are made a narrative by senior people of our movement, who have been part of these important and thorough policy formulation processes.”

“No-one can say in the last nine years there was policy uncertainty, particularly those who were in the leadership of our movement (ANC) and Government during this period.”

Jacob Zuma guns for his critics

Sorry Cyril, but we think you might be on the end of an “indirect Tweet” here. It marks another intriguing chapter of the former president’s career on social media. After joining Twitter in December, he’s been responsible for a few Twitter-storms and comical moments on the platform. However, it seems this latest post was strictly personal.

IN THE PAST 9 YEARS THERE HAS BEEN POLICY CERTAINTY