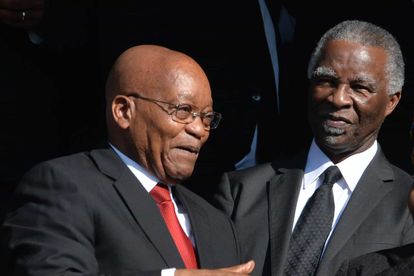 The relationship between former presidents, Thabo Mbeki and Jacob Zuma has never been one founded on the basis of mutual respect.

It is no secret that Mbeki, in his capacity as a scholar, did not think too highly of his successor. However, we had no idea how far back this went.

Thanks to Vusi Mavimbela, the former government intelligence chief and Mbeki’s special advisor during his tenure as the president in 1999, it has been revealed that Mbeki did not want Zuma as his deputy.

According to a Sowetan report, written by Moipone Malefane, Mavimbela is set to release his memoirs, a book titled Time is Not a Measure this week.

In it, he recalls many moments that have shaped him to be the man he is today. One of the most pivotal moments in his career was when Mbeki was due to be inaugurated as the state president – the second in democratic South Africa.

This is when he had discovered that Mbeki did not necessarily share a liking to his deputy at the time, Zuma. Mbeki was of the firm belief that Zuma would contribute nothing else but institutionalised corruption should he stand as his successor.

Based on everything that is happening now with the country’s state-owned enterprises (SOEs) and the ongoing probes into state officials, Mbeki, in 1999, was on to something.

“He felt Zuma lacked capacity. But he needed a good reason not to appoint Zuma. Thabo Mbeki said to me that under Zuma’s leadership, corruption would be institutionalised and become normal in government and the ANC,” wrote Mavimbela in his book.

We don’t always get what we want in the end, and the same could be said for Mbeki, who according to Mavimbela, would have accepted a co-aligned system of governance with the Inkatha Freedom Party (IFP), where Mangosuthu Buthelezi served as his deputy.