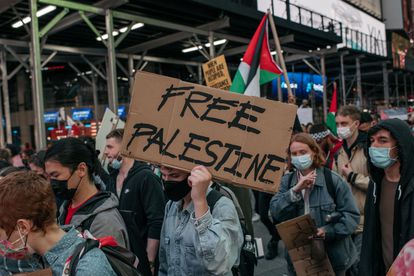 Protesters demanding an end to Israeli aggression against Palestine march in the street in Midtown Manhattan on May 11, 2021 in New York City. Photo: AFP/Getty Images/Scott Heins/

Protesters demanding an end to Israeli aggression against Palestine march in the street in Midtown Manhattan on May 11, 2021 in New York City. Photo: AFP/Getty Images/Scott Heins/

With fears growing of a “full-scale war” between Israel and the Palestinians, here is a look at the West Bank and the Gaza Strip.

The two territories plus Israeli-annexed east Jerusalem were long touted as basis of a Palestinian state in a “two-state” solution to the long-running conflict.

But that goal has become ever more distant, with the West Bank fragmented by Jewish settlements and several states recognising Jerusalem as Israel’s “undivided” capital.

Here is some background.

Palestine and Israel: What you need to know

In 1947 the United Nations voted to partition British-ruled Palestine into two states – one Arab and one Jewish. It made Jerusalem, sacred to the three Abrahamic religions and claimed by both sides as their capital, an international zone.

Almost immediately, fighting broke out that would eventually see more than half the Palestinian population – 760 000 people – fleeing or being expelled from what was to become Israel.

As the British mandate ended in 1948, Israel declared statehood. The next day its Arab neighbours declared war. The conflict ended with Israel controlling 78% of mandate Palestine.

In the so-called Six-Day War of 1967, Israel occupied both the West Bank and the Gaza Strip. It also occupied and later annexed east Jerusalem, which contains many of the sites holiest to Judaism, Islam and Christianity.

By far the larger of the two Palestinian territories, the West Bank covers 5 655 square kilometres and is sandwiched between Israel and Jordan. It has been occupied by the Israeli army for the past five decades.

The Palestinian Authority, headed by Mahmud Abbas, has limited powers over just 40% of the territory, mainly urban centres. Israel, which controls all the entry points, administers 60% of the territory including its Jewish settlements, as well as its vital water resources.

Israel has also erected a security barrier partly following its armistice line with the West Bank but also cutting deep into the territory. About 400 000 Israelis live in the West Bank, alongside 2.7 million Palestinians.

The sparks for the current crisis were clashes at the flashpoint Al-Aqsa mosque compound and a years-long bid by Jewish settlers to take over homes Palestinians say are theirs.

The status of Jerusalem is possibly the most sensitive issue of the whole conflict. After capturing it in 1967, Israel annexed east Jerusalem, including the Old City, in a move never recognised by the international community.

Israel views the whole city as its capital: a stance backed by former US President Donald Trump, who moved Washington’s embassy there. Palestinians want East Jerusalem as the capital of their own future state.

This lies directly above the Western Wall, the holiest place where Jews are allowed to pray, a short walk from the Church of the Holy Sepulchre, where Christians believe Jesus was crucified and buried.

This strip of territory bordering Israel sits on the Mediterranean Sea, and also shares a border with Egypt.

It is one of the world’s most densely populated areas, with some two million people squeezed into a strip just 41 kilometres long and at one point less than six kilometres across.

After occupying Gaza for 38 years, Israel unilaterally withdrew in 2005, but soon afterwards imposed a stifling land, air and sea blockade. Islamist movement Hamas, which won Palestinian elections in 2006, seized the territory from the Palestinian Authority the following year.

Israel, which like most western governments considers Hamas a terrorist organisation, has carried out three full-scale military offensives against Gaza since 2008.

Half of Gaza’s residents live below the internationally recognised poverty line.