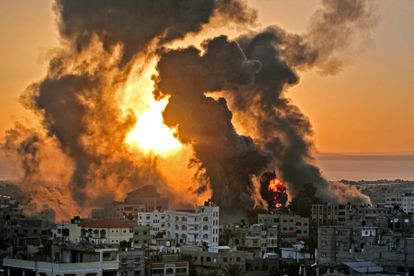 A fire rages at sunrise in Khan Yunish following an Israeli airstrike on targets in the southern Gaza strip, early on May 12, 2021. Photo: AFP/YOUSSEF MASSOUD

A fire rages at sunrise in Khan Yunish following an Israeli airstrike on targets in the southern Gaza strip, early on May 12, 2021. Photo: AFP/YOUSSEF MASSOUD

The Israel Defense Forces (IDF) announced that it fired artillery towards Lebanon after rockets were fired from the country towards Northern Israel on Monday night, 17 May.

SIX ROCKETS FIRED TOWARDS ISRAEL BUT DID NOT CROSS THE BORDER

In a statement at 22:57 SAST on Monday, the IDF said six rockets were fired towards northern Israel and they all fell short of their targets and did not cross into Israeli territory.

“In response, our artillery forces fired towards the sources of the launches,” said the IDF.

A Lebanese military source told AFP that three “Grad-type” rockets were launched from the south of Lebanon towards Israel.

“Three Grad-type rockets were fired from the Shebaa Farms area,” said the source.

The ongoing barrage of rockets between Israel and Hamas, in Palestine, has led to the death of more than 200 people with the Gaza Strip being the epicenter. On Sunday, at least 33 Palestinians were killed in the deadliest attack on the Gaza Strip so far.

Protests against Israel’s air campaign have been taking place in Lebanon and across the world. The neighboring country is home to one of the Jewish state’s foes Hezbollah.

According to AFP, a Lebanese protester, who was a member of Hezbollah, was killed by Israeli fire at the border last week.

On Monday, US President Joe Biden reportedly expressed his support for a ceasefire between Israel and Hamas in a phone call with the Israeli Prime Minister.Benjamin Netanyahu.

So far, Biden has not added his voice to the call from global leaders and many members of his own party for an immediate ceasefire in Israel.

In fact, Biden doubled down on his support for Israel’s right to defend itself against rocket attacks but encouraged the country to make sure innocent civilians are protected, according to a statement from the White House.

The White House is yet to publicly criticise the Israeli airstrikes but according to AFP officials have suggested that critical views are being shared in private.

President Cyril Ramaphosa condemned Israel’s actions as a violation of international law, which show a disregard for United Nations Security Council resolutions. “Since Israeli security forces launched assaults on worshippers at Al Aqsa Mosque in Jerusalem last week, the violence has now engulfed the Gaza Strip, large parts of the West Bank and a number of Israeli cities,” said Ramaphosa.