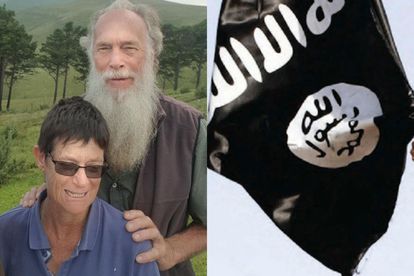 Rachel and Rodney Saunders were kidnapped and murdered in 2018 by an ISIS trio who’s trial will begin in the Durban High Court next week. Photos: Nick Bailey and Researchgate/Peter Wignell

Rachel and Rodney Saunders were kidnapped and murdered in 2018 by an ISIS trio who’s trial will begin in the Durban High Court next week. Photos: Nick Bailey and Researchgate/Peter Wignell

The alleged ISIS acolytes Bibi Fatima Patel, Sayfudeen Aslam Del Vecchio and Ahmad Mussa will appear in the Durban High Court next week for the start of their kidnapping and murder trial. Their victims are botanists Rachel and Rodney Saunders, a UK couple, living in South Africa who were last seen alive in February 2018.

It is alleged that the trio hoisted an ISIS flag after their kills.

THE CHARGES AGAINST DURBAN’S ISIS TRIO

According to the indictment from the National Prosecuting Authority (NPA), the state is pursuing kidnapping, robbery with aggravating circumstances, theft, and the murders of both Rodney, 74. and Rachel, 63. Saunders against the ISIS trio.

However, Del Vecchio is slapped with an additional sixth charge of malicious damage to property.

NPA spokesperson Natasha Kara says the additional charge to Del Vecchio is for the damage caused to sugar cane fields belonging to Tongaat Hulett in September 2017. The damage caused the company a loss of approximately R2.3 million.

THE CHILLING CASE OF RACHEL AND RODNEY SAUNDERS

The couple had dual UK and South African citizenship and owned a seed business in Cape Town.

According to the indictment, the Saunders set off from Cape Town on 5 February 2018 to film a video documentary in the Northern Free State.

On 8 February, the Saunders told one of their employees that they would be camping at the Bivane Dam in KwaZulu-Natal. That was the last time anyone would ever hear from the botanists.

The following day after the Hawks investigation began, the ISIS trio were using Rachel Saunders’ FNB card to withdraw money from various ATMs and make purchases.

Close to R740 000 was drained from their accounts

Police analysed data from Rachel’s phone that was linked to her FNB card and Patel’s phone that placed the ISIS sympathiser at Ngoye Forest on 10 February with the Saunders.

A search and seizure was conducted on 15 February following the arrest of Patel and Del Vecchio at their home in Endlovini but the Saunders were not found so the search continued.

The third member of the ISIS trio, Mussa, was arrested on 23 March.

According to the NPA’s indictment, Mussa submitted a statement that stated Patel woke him and said they must meet Del Vecchio on the road. They subsequently reached Tugela River Bridge and disposed of two sleeping bags with the Saunders.

Bloodsoaked trousers, stolen cell phones, and the bloodstained vehicle of the Saunders were recovered and mounted as evidence against the ISIS trio.

“Kill the kuffar and abduct their alias, to destroy infrastructure and to put fear in the heart of the kuffar.”

On 10 February 2018, the ISIS trio learnt about the Saunders in the forest and Del Vecchio said that it is a good “hunt” and that they had equipment. The conversation continued and Accused 2 confirmed that he has the “target”.

On 12 February in a Telegram chat between Del Vecchio and an unknown person he confirmed he was withdrawing cash from the ATM.

“The preys are in hellfire”

Del Vecchio gave guidance and support on 10 February 2019 during a discussion with an unknown person.

“When the brothers in kinya go out and do this work it very important that the body of the victims is never found and it remains a missing person case.“