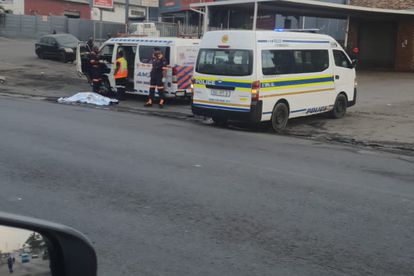 Two fleeing robbers met with a disaster in a hit and run collision.
Image via Facebook: PT Alarms.

Two fleeing robbers met with a disaster in a hit and run collision.
Image via Facebook: PT Alarms.

Two fleeing robbers met with disaster when they were struck by a speeding vehicle in a fatal hit and run collision on Phila Ndwandwe Road in Isipingo early on Tuesday.

It is alleged that the suspects, armed with knives, held up a worker making his way to his place of employment and in their haste to flee, they were rammed by a speeding vehicle.

According to PT Alarms one suspect died on scene and the second suspect is alleged to have sustained injuries and was reportedly transported by an unknown private vehicle according to bystanders.

“The vehicle involved in the collision drove off. PT Tactical and PT Ambulance Service responded to the scene together with SAPS.”

In a separate incident, a planned robbery by two armed men did not go as planned. Instead, one of them shot the other and instead of helping his accomplice, he took his firearm and fled the scene. The incident happened on Sunday in Gqeberha when the two armed men tried to rob a 34-year-old man.

According to police, around 20:30 on Sunday night, the robbers spotted their possible victim in Nomakanjane area, Ikamvelihle. The victim was walking home when the armed men approached him.

“Fearing that they were going to rob him, he attempted to flee from them. They chased him, and after hitting him in the face with a firearm, the victim fled into a nearby shack,” said Beetge.

One of the robbers followed the victim and went after him inside the shack. The other was waiting outside, gun in hand.

ALSO READ: Update on the man who allegedly jumped to death in Amanzimtoti