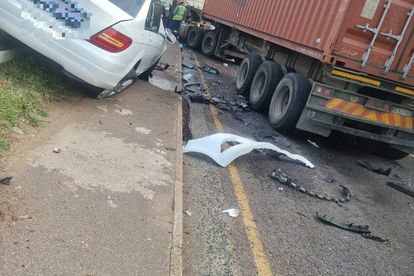 A male motorist was allegedly gunned down in a drive-by shooting in Isipingo Hills shooting. Image: PT Alarms.

A male motorist was allegedly gunned down in a drive-by shooting in Isipingo Hills shooting. Image: PT Alarms.

A male has been fatally wounded in a drive-by shooting at the corner of Platt Drive in Isipingo Hills on Thursday afternoon.

MOTORIST GUNNED DOWN IN ISIPINGO HILLS

According to PT Alarms, it is alleged that a white Mercedes Benz crashed into a truck. Thereafter a vehicle believed to be a Fortuner, stopped and one male alighted from the vehicle. The male was armed with a firearm, alleged to be a high calibre weapon.

“The armed male opened fire on the driver of the Mercedes and fled. The driver sustained gunshot wounds to his head and face and was deceased on scene.

“The scene is active and the circumstances surrounding the fatal shooting are unknown and subject to police investigation.”

PT alarms and SAPS are reportedly on scene.

ONE DEAD IN CARLETONVILLE DRIVE-BY SHOOTING

In a separate incident, four people were injured in an alleged drive-by shooting in Carletonville, Gauteng on Thursday morning, 28 July.

At the scene, paramedics found that the patient lying in a light motor vehicle was fatally wounded. They had succumbed to “their numerous gunshot wounds” and nothing more could be done. They were declared dead at the scene.

ER24 treated a woman for a gunshot wound to the buttocks while the Gauteng EMS treated the two other patients. Once treated, the survivors were transported to a hospital for further care.